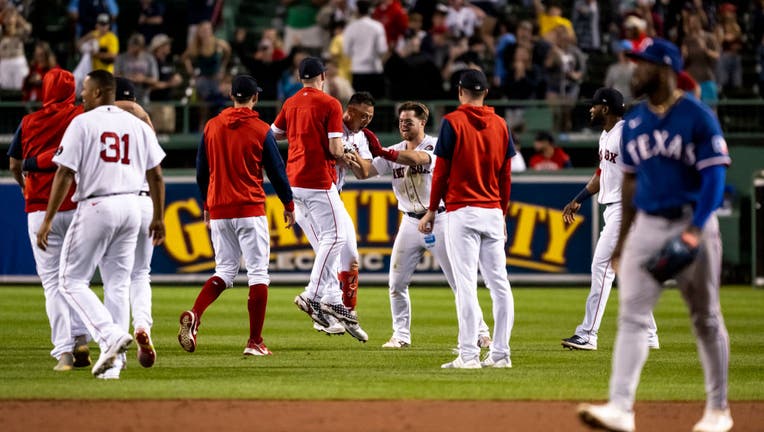 BOSTON, MA - SEPTEMBER 1: Rob Refsnyder #30 of the Boston Red Sox reacts with teammates after hitting a game winning walk-off single during the ninth inning of a game against the Texas Rangers on September 1, 2022 at Fenway Park in Boston, Massachuse

BOSTON - Rob Refsnyder hit a game-ending single in a four-run ninth inning for Boston as the Red Sox rallied to beat the Texas Rangers 9-8 on Thursday night.

The Red Sox trailed 8-3 in the eighth and 8-5 entering the ninth. Boston promptly loaded the bases with none out against Jonathan Hernández (1-1). Rafael Devers hit a two-run double and Kiké Hernández hit an RBI single to tie the game before Refsnyder completed the comeback with a drive to left.

Refsnyder took a wide turn around first before a swarm of teammates caught him and piled on after storming out of the dugout. The Red Sox entered Thursday having lost 7 of 10.

"I think we’ve all been trying to do our best and working hard. A lot of the guys have been frustrated, so it was nice to come through and it’s always nice to celebrate with your teammates," Refsnyder said.

Jeurys Familia (2-1) worked a scoreless ninth for a Boston staff that was constantly in trouble. The Rangers stranded 12 runners as they dropped their fifth straight.

Adolis Garcia hit a two-run homer in the eighth to help put Texas in position to stop its skid.

In the bottom half, Devers began Boston's comeback with an RBI double. He scored on a single by Christian Arroyo, who also drove in three runs.

"That last inning was what we expected out of the lineup — swing at strikes. If not, keep the line moving," Boston manager Alex Cora said.

Rookie Rangers starter Glenn Otto struck out a career-best eight batters and departed after Alex Verdugo homered leading off the sixth to get the Red Sox within 4-3.

Garcia drove in three runs for the Rangers. Corey Seager had an RBI single in the third and a run-scoring double in the fifth.

Refsnyder said he had an extra cup of coffee before the game after a rough night. The Rex Sox got home late after concluding a three-game series at Minnesota, and he was greeted at home by a grumpy toddler.

"I didn’t sleep well at all. My son was pretty cranky — we got in at like 5:30 in the morning, so maybe I shouldn’t sleep very well more often," Refsnyder said.

A boy stationed in the front row in center field, prepared with a glove and clad in a No. 9 Red Sox jersey, caught Verdugo's homer in the sixth. The boy leapt several times in celebration and high-fived fans in all directions. The play was reviewed for potential fan interference, but umpires quickly confirmed the home run.

Rangers: Transferred RHP Josh Sborz (right elbow sprain) from the 15-day injured list to the 60-day IL, ending his season. ... Recalled OF Nick Solak from Triple-A Round Rock and added RHP Jesús Tinoco from Round Rock to the expanded roster.

Red Sox: RHP Nathan Eovaldi (right shoulder inflammation) has resumed throwing but manager Alex Cora wasn’t ready to offer a potential return date. Cora said the club was going to continue to be cautious with Eovaldi, who missed 33 games earlier in the season with inflammation in his lower back. ... Recalled C Connor Wong from Triple-A Worcester and added RHP Eduard Bazardo to the expanded roster.