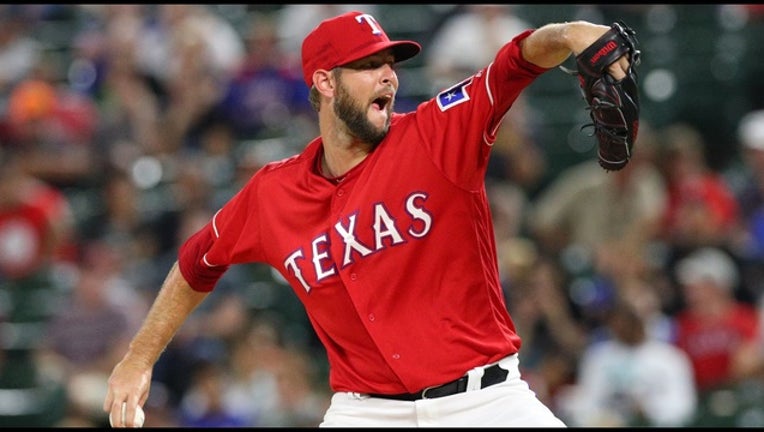 Martin, whose fastball has averaged 96 mph this season, has 24 strikeouts and only one walk over his last 19 appearances since May 24 for his hometown Rangers. The 6-foot-8 Martin has four saves and a 3.08 ERA in 38 games this year, with 43 strikeouts and four walks in 38 innings.

"We felt he had as much upside as anybody on the trade market," Braves general manager Alex Anthopoulos said Tuesday night after the deal was announced.

Allard, a 21-year-old lefty, was the 14th overall pick by the Braves in the 2015 amateur draft and signed for a $3,042,400 bonus. That was the same year that Dansby Swanson, now Atlanta's shortstop, was the first overall pick by Arizona before Houston used the second pick to get Alex Bregman, the All-Star third baseman for the Astros.

The Rangers were playing a home game against Seattle when the 33-year-old Martin was seen high-fiving teammates in the bullpen before leaving down the tunnel. Texas announced the trade a few minutes later.

Martin, who has only five career saves in 124 big league games, might get a chance to close in Atlanta. Luke Jackson has 17 saves but has struggled at times, failing to convert seven other chances.

Martin made his big league debut with the Colorado Rockies in 2014 and then pitched with the New York Yankees for part of the 2015 season. After two years in Japan, he signed with Texas before the 2018 season.

The Rangers optioned Allard to Triple-A Nashville. He was 7-5 with a 4.17 ERA in 20 starts this season for Triple-A Gwinnett.

"He's a young starter who already has significant experience at the upper levels," Rangers general manager Jon Daniels said. "His reputation as a competitor is well known, and we look forward to watching him compete as a Ranger for a long time to come."

Allard was regarded as one of the Braves' top pitching prospects and got a call to the big leagues in 2018 at age 20. But after being rocked for a 12.38 ERA in three appearances, giving up 19 hits and three homers in eight innings, he spent all of this season at Triple-A.

Even as the team made numerous moves looking to bolster its shaky rotation, it was clear the lefty had dropped behind other pitchers in Atlanta's deep farm system.

The Braves could still be looking for more help, but Anthopoulos gave no indication of how close they may be to another deal.

"Any opportunity to do a good baseball trade that makes sense for us, regardless of who they are, we're going to look to do it," said Anthopoulos, who in the past has been reluctant to deal the team's top prospects.

He said the market is flush with available relievers, which is why he decided to followed that path rather than go after a starting pitcher. The Braves might have pursued an outfielder to replace the injured Nick Markakis, but Adam Duvall's strong start since being called up last week from Gwinnett made that less of a priority.

"If we saw the value that we saw in the relief market in the position player market or the starting position market, we would've gone down that path," Anthopoulos said.

Markakis is expected to be out until at least mid-September with a fractured wrist. But Duvall, a former All-Star who endured a dismal 2018 season, revitalized his career with 29 homers in Triple-A this season. He hit two more homers against the Nationals on Tuesday night, giving him three in four games since returning to Atlanta.

"I know it's a small sample," Anthopoulos said. "But this is not a surprise. This is the player he was if you look at his career. The outlier was 2018."