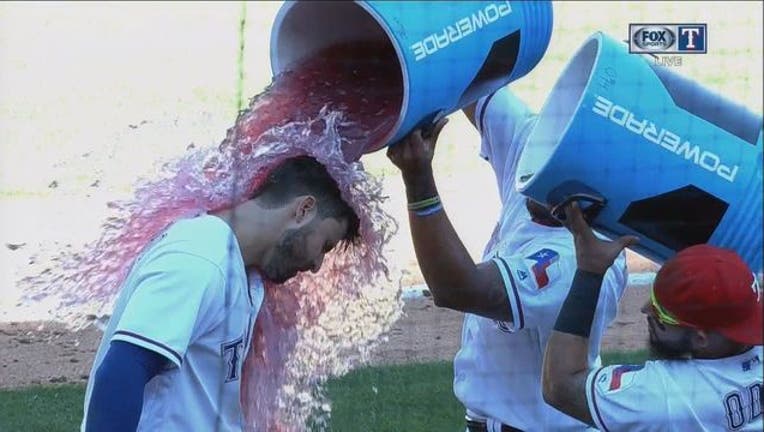 ARLINGTON, Texas (AP) - Joey Gallo has hit the hardest homer in the majors this season - and some of the longest.

The young slugger who went to spring training not even knowing if he'd make the Texas Rangers roster to start this season has now played all 22 games in place of injured third baseman Adrian Beltre.

There have been majestic home runs, the kind that have come to be expected in his short career. But the 6-foot-5, 235-pound Gallo is showing that he's more than just a big bopper. He can field the ball, too, and isn't too bad running the bases when not trotting around them.

Gallo went into the Rangers' day off Thursday tied for the AL lead with seven home runs , all but one of them at least 422 feet. That included the 462-foot blast with an exit velocity of 116.1 mph, according to MLB stats - the one that hit Rick's Popcorn Wagon on the concourse well beyond the right-field seats, and the first of his two homers in that home game against the Kansas City Royals last Friday.

"He's the guy that needs to be complimented on everything, just the complete game really, and he's been playing that way," manager Jeff Banister said. "We talked about his defense, we've talked about the base running, the presence of mind on defense, and then engaged at the plate and putting really good swings."

The 23-year-old Gallo, who as a kid played on the same Little League team in Las Vegas with Bryce Harper and Kris Bryant, also has four doubles, 16 RBIs, 16 runs scored and three stolen bases. And in the field, Gallo has only one error in 58 total chances while playing every defensive out at third base for Texas.

"I'm just starting to learn to trust my abilities and trust myself more in what I can do," Gallo said. "I think I used to listen to other peoples' opinions too much. I wouldn't think I was good enough to be here because everyone else thought I wasn't."

Beltre has been on the disabled list all season dealing with calf issues in both legs, and Banister indicated Wednesday before the Rangers' 14-3 over Minnesota that the 38-year-old third baseman isn't seeing significant progress yet in his recovery.

Texas trailed 2-0 against the Twins in the fifth when Gallo made a lunging backhanded stab of Jorge Polanco's sinking liner that appeared headed to the left-field corner, then threw to second to complete an inning-ending double play.

Texas tied the game in the bottom of the inning, and led for good after Gallo got hit by a pitch to start the sixth and then got struck on the back of his shoulder by a catcher's throw while scoring on a wild pitch. He walked twice before that plate appearance.

The Rangers picked Gallo 39th overall in the 2012 amateur draft, and their top prospect made an impressive major league debut June 2, 2015, after Beltre went on the DL with a thumb injury. Gallo made the jump from Double-A with an upper-deck homer, a double off the top of the wall and a club record for a big league debut with four RBIs.

Gallo was initially with the Rangers about a month, staying to play some outfield after Beltre returned. He also ended that season on the roster.

After striking out 19 times with just one hit in 25 big league at-bats last year, Gallo appeared headed back to minors this year since the Rangers had re-signed Mike Napoli to fill their void at first base and had a crowded outfield. But then Beltre reported to Arizona training with calf issues that haven't gone away.

"When spring training started, I didn't know if I would really have an actual chance to be on the team and make the team and be here," Gallo said "So just to be here, be contributing to wins for this team, helping this team out, it's pretty awesome."