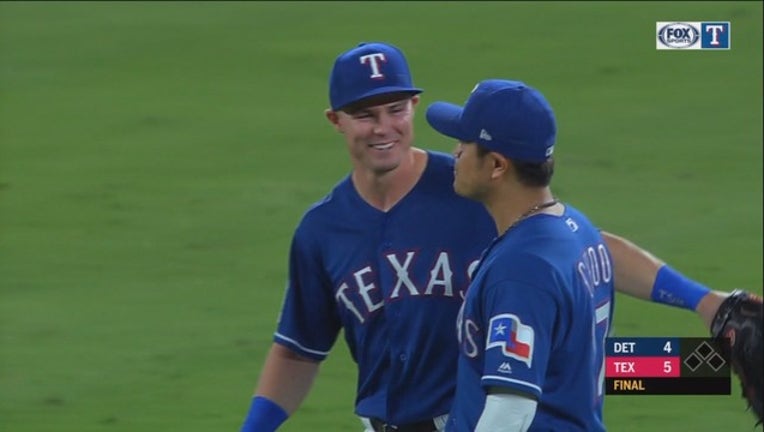 Leclerc held for a save, then fired the ball onto the right field roof at Globe Life Park as the Rangers beat the Detroit Tigers 5-4 on Friday night.

Leclerc allowed two runs on two hits, two walks and a wild pitch. The Tigers had runners at second and third, but Jeimer Candelario was retired to end the game on a grounder to first with Leclerc covering.

The 25-year-old Leclerc took a couple of steps and let fly, the ball sailing far over the seats.

"I feel happy. I just tried to give it to a fan back there," Leclerc said.

Informed that the ball cleared the double-decked stands, Leclerc said, "Too much power."

Rangers manager Chris Woodard said he didn't see the throw and suspected it was done out of frustration.

"He felt like he made that a lot harder than it was, but this game's not easy," Woodward said. "I don't question that. Obviously, I'll probably talk to him about it, probably say not to do that next time."

Last Sunday, agitated Cleveland pitcher Trevor Bauer threw the ball from just past the mound over the center field wall after getting pulled from a game at Kansas City. Bauer was fined by Major League Baseball and later traded to Cincinnati.

Leclerc lost the closer's job in late April but is serving in that role now with Shawn Kelley on the injured list.

Leclerc said he appreciates being given another chance to close.

"I've just got to enjoy it and do my work," he said after posting his sixth save.

Lance Lynn (14-6) struck out 10 in seven innings and tied Houston's Justin Verlander and Washington's Stephen Strasburg for the major league lead in wins.

Lynn allowed four hits, only one past the first inning. He retired 10 straight after falling behind 1-0 five batters in on three singles.

The Tigers, with the majors' worst record at 32-73, came off a Wednesday win in Anaheim and failed for the 10th straight time to win consecutive games. Detroit's most recent winning streak is the last three games of May.

"They stayed after the game at the end and put pressure on a closer," Tigers manager Ron Gardenhire said.

"I battled as hard as I could," Alexander said, "but I think my biggest thing was I couldn't get the ball down."

After a two-out RBI single by Harold Castro in the first inning, Lynn didn't allow another baserunner until Travis Demeritte, making his major league debut, walked to lead off the fifth. Demeritte tripled down the left-field line in the seventh for his first hit.

Danny Santana had a single, a triple, a sacrifice fly and scored twice in the Rangers' first game this month after he hit .391 in July.

WELCOME TO THE SHOW

Demeritte, 24, was a first-round draftee of Texas in 2013 and was acquired by Detroit on Wednesday in the trade that sent RHP Shane Greene to Atlanta. He hit 20 home runs in 96 games for the Braves' Triple-A affiliate. He went 1 for 2 with two walks.

The Tigers are 3-17 against AL West teams this season and 3-25 since last Aug. 3. ... Detroit DH Miguel Cabrera's single in the eighth gave him 1,676 RBIs, tying him for 26th place with Gary Sheffield. ... Texas selected the contract of RHP Emmanuel Clase from Double-A Frisco and optioned LHP Kyle Bird and RHP Phillips Valdez to Nashville.