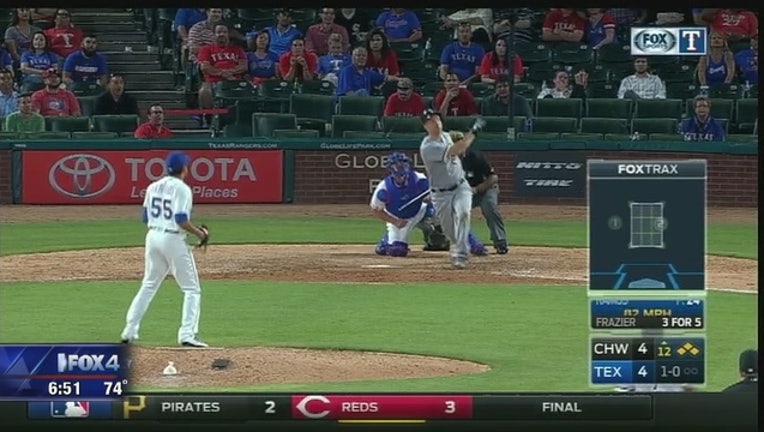 ARLINGTON, Texas (AP) — The Texas Rangers rallied twice against the bullpen with the best ERA in the majors coming in.

There was no coming back from Todd Frazier's second home run of the game for the White Sox — a tiebreaking grand slam in the 12th inning of an 8-4 Chicago victory Monday night.

Rougned Odor homered and had a triple that sparked an eighth-inning rally, but the first four Chicago hitters reached in the 12th against left-hander Cesar Ramos (0-2), capped by Frazier's towering drive several rows into the seats above the high wall in left field.

"We ran into a guy that got hot tonight," said Texas manager Jeff Banister, who was ejected in the ninth after arguing from the dugout following a pitch called a ball for closer Shawn Tolleson. "That was tough."

Frazier, whose average had dropped to .194 because of a 3-for-35 slide, had four hits and a career-high six RBIs to help the White Sox win after the bullpen blew leads in the eighth and ninth innings despite a majors-leading 1.82 ERA going into the game.

"It felt good. It felt really good," Frazier said. "With experience, you understand that it's going to come around. Just glad it came today and in extra innings."

Last year's All-Star home run derby winner in front of the home crowd in Cincinnati, Frazier hasn't stopped hitting long balls during his slow start. He has 10 since the offseason trade, two behind Robinson Cano's AL-leading total at the start of the day.

Dan Jennings (1-0) pitched a scoreless 10th and 11th as the White Sox won their fourth straight in a series opener between teams coming off three-game sweeps. Jennings got an inning-ending double play from Mitch Moreland with the bases loaded in the 10th.

The AL Central-leading White Sox beat Texas for the sixth consecutive time going back to last season after a sweep in Chicago in April.

Chicago closer David Robertson had a shot a save and a win but couldn't get either one, allowing a tying double to Ian Desmond in the eighth and a tying single to Hanser Alberto in the ninth.

"We did what we needed to do," said Texas starter Colby Lewis, who gave up two runs in seven innings. "That ballgame was close all game. And that's what you want."

Avisail Garcia and Austin Jackson had three hits apiece and teamed up for a go-ahead play in the ninth before the Rangers pulled even for the second time. Garcia scored for a 4-3 lead on Jackson's suicide squeeze bunt that turned into a hit when nobody covered first for the Rangers.

Odor's team-leading seventh homer for Texas leading off the sixth ended Miguel Gonzalez's one-hit shutout, and his leadoff triple in the eighth sparked the game-tying rally.

After Adrian Beltre's single scored Odor, Robertson came on for a four-out save. He didn't even get the first one, allowing Desmond's double that scored pinch-runner Drew Stubbs.

Banister also was tossed by Diaz after a two-strike pitch from Tolleson was called a ball and Alex Avila followed with a singled when the White Sox took the lead in the ninth.

"You can come up with your own opinion on what I was upset about," Banister said. "I felt like our guy executed a good pitch. Didn't get the pitch called."

There was no update on Texas right-hander A.J. Griffin, who left his last start early with right shoulder stiffness and went on the 15-day disabled list. He was supposed to be examined Monday. Griffin didn't pitch in 2014 or 2015 after elbow surgery, and his recovery last year was cut short by a shoulder issue.

White Sox: Avila returned at catcher after missing two weeks with a right hamstring strain. He went 1 for 4 with two walks.

Rangers: RF Shin-Soo Choo (right calf strain) says he will spend four or five days in Arizona before a decision on a possible rehab assignment. He's been on the DL since April 10.