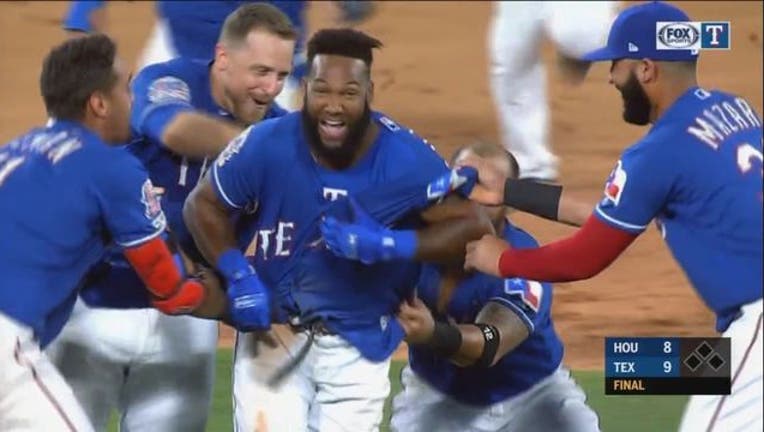 Elvis Andrus had a one-out single and a stolen base before All-Star slugger Joey Gallo drew a walk off Roberto Osuna (3-2). Santana, who homered earlier in the game, ended it with a liner that was just out of the reach of a diving attempt by center fielder George Springer.

Shawn Kelley (5-2), the fifth Texas pitcher, had a perfect ninth.

The Rangers got even at 8 when Ronald Guzmán hit their fifth homer of the game. That two-run shot high off the pole down the right field line came against Héctor Rondón, the third Astros reliever after Cole left the game.

Rookie Yordan Álvarez hit two of Houston's four homers. He hit a tiebreaking shot in the sixth and another solo shot the following inning to make it 8-4. He has nine homers and 27 RBIs in his first 21 career games.

Cole struck out 13 in six innings, his 10th game this season with at least 10 strikeouts. His 183 strikeouts for the season pushed him two past Washington's Max Scherzer for the big league lead. Cole allowed more than two earned runs for the first time in a span of nine starts since his last loss May 22.

The nine combined home runs were the most in a game at the Rangers' ballpark since 2010, when Texas and Boston also combined for nine homers. ... Cole has 42 strikeouts over 22 1/3 innings in four starts against Texas this season. ... Gallo has four homers in 22 career at-bats against Cole. ... Andrus' two stolen bases gave him 21 for the season. It is his club-record 10th season with at least 20.

Astros: All-Star INF Alex Bregman didn't play a day after needing four stitches for a cut on his chin. A groundball took a nasty hop and hit him on the face when he was playing shortstop in the series opener. ... RHP Joe Smith was activated from the 60-day injured list. The 35-year-old pitcher had surgery last December to repair a ruptured Achilles tendon in his left leg.

Rangers: Hunter Pence, out since June 17 (right groin strain), could be activated as early as Saturday. Pence was the DH for Double-A Frisco for the second night in a row, and went 0 for 4 with three strikeouts. The injury kept Pence from playing in the All-Star Game after being selected by fans as the AL's starting designated hitter.