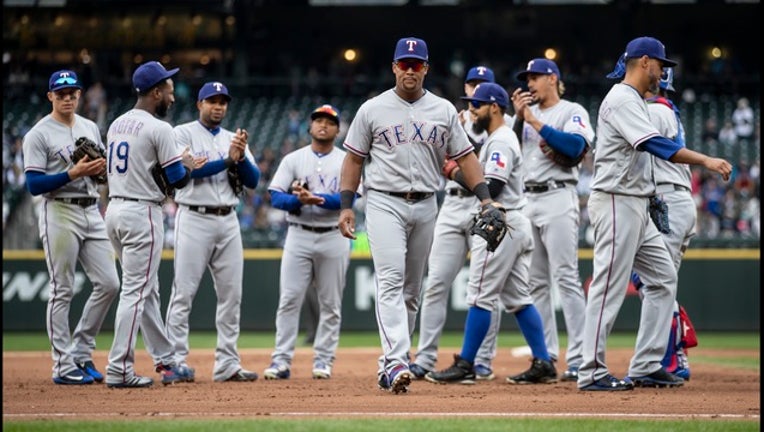 Teammates applaud Adrian Beltre of the Texas Rangers as he walks off the field during the fifth inning against the Seattle Mariners at Safeco Field on September 30, 2018 in Seattle, Washington. (Photo by Stephen Brashear/Getty Images)

ARLINGTON, Texas (AP) - The new manager of the Texas Rangers, whomever that may be, will have a talented group of 20-something position players who got a lot of experience during a 95-loss season.

After deciding who will replace Jeff Banister, general manager Jon Daniels has to find some starting pitchers.

The Rangers also go into the offseason awaiting a final decision from future Hall of Fame third baseman Adrian Beltre on if he has indeed played his last game after 21 seasons in the majors with 3,166 hits and 477 home runs. He hit a team-best .273 with 15 homers and 65 RBIs in 119 games this year.

Beltre got huge ovations from fans, teammates and opposing players when taken out midway through games the past two Sundays - in the home finale Sept. 23 and then Sunday in Seattle, where he played five seasons before one year in Boston and the last eight in Texas. His wife and 12-year-old son, who has his own locker next to his dad in the home clubhouse, were in the front row for the season finale.

"I don't know if this is going to be it, but I enjoyed every minute of it," said Beltre, who turns 40 next April. He is expected to take a week or more to think things over.

Shortstop Elvis Andrus, at 30 the team's longest-tenured player with 10 seasons in Texas, also has a decision to make. He is halfway through a $120 million, eight-year contract that offers him the opportunity to opt out this offseason, or next, and become a free agent.

"I'll go into the offseason and decide what's best. I love being here. I want to retire as a Ranger. That's my motivation," said Andrus, the only current Rangers player to be part of both of their World Series appearances. "Hopefully the big boy will come back. That will make it a lot easier."

As for the manager, bench coach Don Wakamatsu served in the interim role after Banister was fired with 10 games left and is considered a candidate for the job.

The Rangers won the AL West in each of Banister's first two years (2015-16). They now have consecutive losing seasons for the first time since 2005-08, though Daniels said that wasn't necessarily the manager's fault when the focus switched to the development of younger players.

That includes Jurickson Profar, the likely starting third baseman if Beltre retires. Profar, who at age 19 in 2012 homered in his first big-league at-bat before shoulder issues forced him to miss two full seasons, hit .254 with 20 homers and 77 RBIS in 146 games while playing all four infield positions. Joey Gallo, the 24-year-old slugger, had his second 40-homer season in a row.

When Mike Minor signed a three-year contract last offseason, he was coming off a season as a full-time reliever after missing two years because of left shoulder surgery. The 30-year-old lefty went 12-8 with a 4.18 ERA in 28 starts. He was the only pitcher to start and finish the season in the Rangers rotation. His 157 innings more than doubled his 77 2-3 in Kansas City last season.

Lefty Cole Hamels was traded in July to the Chicago Cubs, and inconsistent lefty Martin Perez likely won't be brought back. Bartolo Colon, the 45-year-old right hander who became the winningest pitcher born in Latin America, isn't coming back. Yovani Gallardo was 8-8 with a 5.77 ERA in 18 starts after rejoining Texas in June, right after injured Doug Fister (1-7, 4.50) made his final start.

Nomar Mazara missed a month on the disabled list because a sprained right thumb that still bothered him after returning to the lineup in mid-August. The 23-year-old right-fielder didn't homer in his last 22 games, and hit 258 overall in 128 games with 20 homers for the third year in a row. He will see hand specialist this week and could have surgery.

The Rangers' ballpark turns 25 next year, which will be the final season there before moving in 2020 to the new stadium being built across the street. The 2019 farewell season for the current ballpark opens March 28 against the Chicago Cubs - maybe against Hamels or Yu Darvish.