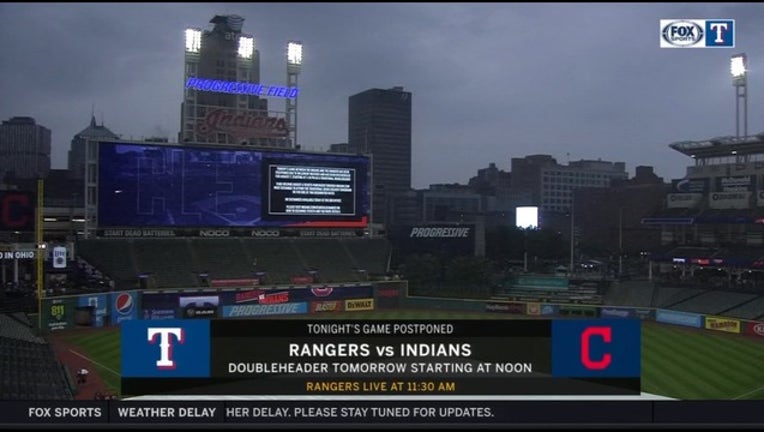 CLEVELAND (AP) - Yasiel Puig has made a quick impact with the Cleveland Indians since being acquired at last week's trade deadline.

Manager Terry Francona believes it's only a matter of time until Franmil Reyes does the same.

Reyes, picked up at the deadline from San Diego, is batting .105 with one RBI and had struck out eight times in 19 at-bats over five games with the Indians.

Reyes got Tuesday night off after the Indians' game with the Texas Rangers was postponed by rain. The teams will play a traditional doubleheader Wednesday at 1:10 p.m.

Puig has taken little time to adjust to his new surroundings, batting .333 in five games. Reyes may be pressing to fit in with the Indians, who trail Minnesota by four games in the AL Central and lead the wild card race by two games.

"Like a lot of guys that change teams for the first time, he's trying to hit it a mile instead of just 340 feet," Francona said. "He's just trying to do too much."

Reyes, at 6-foot-5 and 282 pounds, is an imposing figure from the right side of the plate, but both of his hits with Cleveland have been singles. He's batting .255 with 27 home runs and 46 RBIs this season.

The rainout means the Indians got a break from facing Rangers shortstop Elvis Andrus, who continues to have success against Cleveland pitching.

Andrus went 2 for 4 on Monday, raising his average at Progressive Field to .417. He has a .370 career average against the Indians.

The Rangers used a strong pitching performance to blank the Indians 1-0 for their fifth straight win Monday night. Mike Minor, Jesse Chavez and José Leclerc combined on the shutout.

Texas can match its longest winning streak of the season in Wednesday's opener. The Rangers won six straight from June 22-28.

The Rangers will recall 21-year-old left-hander Kolby Allard to start Friday at Milwaukee. He was acquired from Atlanta for right-hander Chris Martin at the trade deadline.

"We think he can help us win games and we want to see what he's got," Rangers manager Chris Woodward said.

Rangers: RHP Shawn Kelley (sore right biceps) will be activated off the 10-day IL on Wednesday.

Indians: RHP Corey Kluber (broken forearm) will make his first start on a minor league rehab assignment Thursday at Triple-A Columbus. He threw 35 pitches in a simulated game Saturday. Kluber was struck by a line drive May 1.