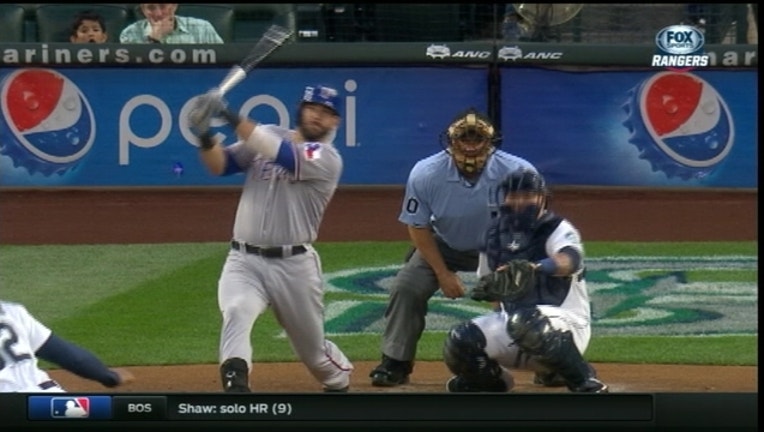 SEATTLE (AP) — At first glance it appeared a line drive by Jesus Sucre had struck Cole Hamels squarely in the left jaw.

Even repeated replays seemed to show the ball hitting Hamels' cheek. Fortunately for him and the Rangers, his left shoulder took the full force of the impact instead.

Hamels managed to shake off the close call and toss seven innings, and Texas homered four times to beat the Seattle Mariners 9-6 on Tuesday night.

"Luckily enough it hit the muscle that I guess I have on me," Hamels said. "It absorbed everything it could. I'm sure I'll have a nice bruise in the next couple days."

The victory pulled the Rangers within one game of first-place Houston in the AL West, the closest they've been to first place since April 18. The Astros lost 4-0 at Oakland.

With two runners aboard in the third, Sucre lined a 1-0 pitch straight back to the pitcher's mound. Hamels managed to deflect the ball with his glove before it slammed into his body, causing the left-hander to stumble and fall to the ground.

After being checked by the Rangers' staff, Hamels (3-1) remained in the game and got out of the jam with just one run allowed on a fielder's choice by Kyle Seager.

"He let us know quickly he was fine," Texas manager Jeff Banister said.

Hamels, acquired from Philadelphia in late July, gave up four runs on eight hits and improved to 9-8 overall.

Shawn Tolleson earned his 31st save.

"It was a bad game," he said. "I had no command. I was getting behind every hitter."

Moreland's solo home run gave Texas the lead in the second. A three-run drive by Choo extended it to 4-0 in the third. Seattle got a run back on Seager's fielder's choice in the bottom half.

After Elvis Andrus reached on an error, Odor homered to give Texas a 6-1 cushion.

Gallo homered off Tony Zych to extend the Texas lead to 8-4.

Stefen Romero drew a nine-pitch walk from Rangers reliever Jake Diekman. Robinson Cano followed with a two-run homer to center field to close the deficit to 8-6 in the eighth.

Rangers: OF Delino DeShields is day to day after leaving Monday's game with a mild left knee sprain. He was not available. Will Venable started in place of DeShields in center field.

Mariners: LHP James Paxton (3-3, 3.70 ERA) is a strong candidate to start Sunday against Colorado. Paxton has been on the disabled list since May 29 with a strained left middle finger. He partially tore his nail on the same finger during a rehab start last week that set the process back. If all goes well in a bullpen session Thursday, he could be activated Sunday.

Rangers: LHP Martin Perez (2-4, 5.07 ERA) has allowed three earned runs or fewer in eight of his nine starts for Texas since joining the rotation July 17. Perez got a no-decision after tossing six innings with just two earned runs in an 11-3 Rangers victory over the Mariners on Aug. 8.

Mariners: LHP Vidal Nuno (0-2, 3.72) will get a spot start for Seattle in the third game of the four-game series. Nuno will make his sixth start of the year for the Mariners. He's made 26 appearances for Seattle, most coming out of the bullpen, since being acquired from Arizona on June 3.