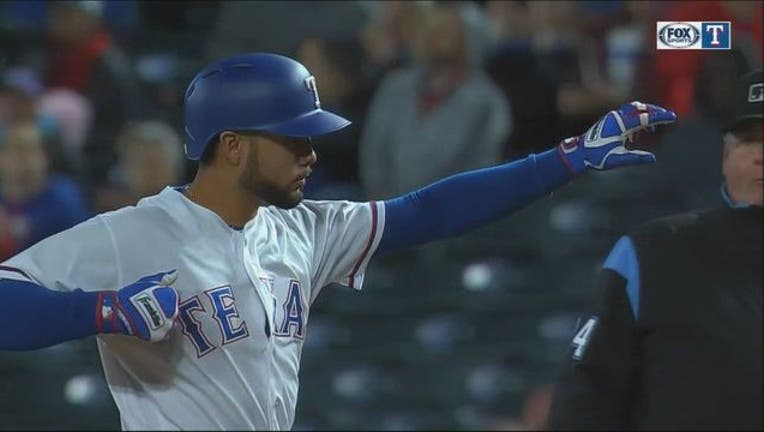 ARLINGTON, Texas (AP) - Isiah Kiner-Falefa hit a go-ahead single in the fifth inning and the Texas bullpen protected the lead Wednesday night, giving the Rangers a 4-2 victory over the Oakland Athletics.

Jesse Chavez (1-0) retired all four batters he faced in relief of starter Doug Fister. Keone Kila pitched a perfect ninth for his fourth save of the season.

Kendall Graveman (0-5) got the first two outs in the fifth before four straight batters reached, beginning with Jurickson Profar's double. Texas scored twice in the inning for a 3-2 lead.

Graveman, who entered the game with a 10.07 ERA, recorded season highs with six innings and seven strikeouts.

Khris Davis' two-out, opposite-field home run in the third was his seventh of the season and 19th in 44 career games against Texas, his most against any opponent.

The Rangers' first run scored in the fourth on a grounder when Juan Centeno beat the relay throw to first on what would have been an inning-ending double play. Oakland challenged, and the call stood.

Texas added an insurance run in the eighth on an RBI triple by Ronald Guzman.

Fister was activated from the disabled list earlier in the day and allowed two runs and four hits in 4 2/3 innings while throwing 105 pitches. He was out since April 10 with a right hip strain.

As Fister was activated, Texas placed Adrian Beltre on the 10-day disabled list with a strained right hamstring.

Graveman's 112 pitches equaled his career high. . Oakland acquired RHP Wilmer Font from the Dodgers for LHP Logan Salow. . Texas recalled OF Ryan Rua from Triple-A Round Rock to replace Beltre on the roster and optioned RHP Matt Bush to Round Rock to make room for Fister.

Athletics: LHP Ryan Buchter left with after facing one batter in the seventh inning with shoulder stiffness.