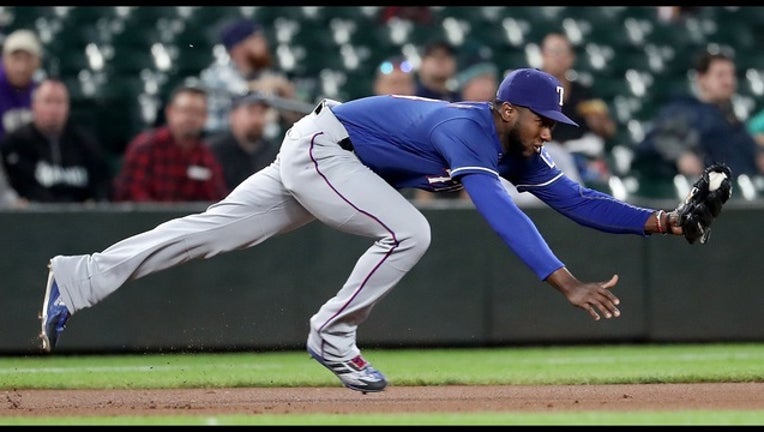 Jurickson Profar #19 of the Texas Rangers reaches for a line out by Mitch Haniger #17 of the Seattle Mariners in the first inning during their game at Safeco Field on September 27, 2018 in Seattle, Washington. (Photo by Abbie Parr/Getty Images)

SEATTLE (AP) - First baseman Ronald Guzman broke a tie with an RBI single in the seventh inning, and the Texas Rangers snapped a three-game losing streak with a 2-0 victory over the Seattle Mariners on Thursday night.

Guzman scored after right-hander Shawn Armstrong plunked Isiah Kiner-Falefa in the helmet with the bases loaded later in the inning.

Ariel Jurado (5-5) threw six scoreless innings, giving up just two hits and striking out three to win back-to-back starts against the Mariners in a six-day span. He won with five innings of two-run relief in an 8-3 victory on Sept. 21 in Arlington, Texas.

Hard-throwing Jose Leclerc collected his 12th save with a spotless ninth inning, and has not been scored upon in his past 21 appearances, dating to July 28 (span of 21 innings). It is the second-longest scoreless streak in the major leagues behind Minnesota's Taylor Rogers (23 2/3 innings).

Duke (5-5) gave up two runs in two-thirds of an inning after Seattle starter Marco Gonzales held the Rangers scoreless for five innings, giving up two hits and striking out six.

Texas has won five of its past six games against the Mariners. It was Seattle's seventh shutout loss of the season.

In his second full season with the Mariners, Mitch Haniger ranks eighth among AL position players with a Wins Above Replacement (WAR) of 6.0.

"I'm not surprised really by anything he's done because the work ethic, the discipline and structure he has," Seattle manager Scott Servais said. "He's as good as anyone."

Right-hander Adrian Sampson figured his first Safeco Field start would be with the hometown Mariners, the team that traded for him in 2015.

But after a season-ending elbow injury on the road with the Mariners in 2016, he was released. And now with Texas, he has worked his way back to the big leagues, first as a reliever and now a late-season starter. His final appearance is Saturday.

"It is a good story," said Sampson, who is from nearby Redmond, Washington. "I have come a long ways, and to have this be the last start after the ups and downs earlier this year . to finish here is big for me."

Mariners: Servais confirmed LHP James Paxton will make his final start Saturday, but declined to name a starter for the season finale Sunday.

Rangers: 3B Adrian Beltre (hip) was held out Thursday, but interim manager Don Wakamatsu expects the four-time All Star to serve as the designated hitter for the next two games before deciding if he plays in the field in the season finale Sunday. "We will honor whatever he wants," Wakamatsu said.

Mariners: OF Denard Span (leg) and INF/OF Dee Gordon (toe) were held out of the starting lineup Thursday, but Servais thinks they will be available for the final three games. Span did fly out to center field as a pinch hitter in the eighth inning.

Rangers: LHP Martin Perez (2-6, 6.13 ERA) wraps up his worst season as a professional. He seeks his eighth career win against the Mariners, which would tie Oakland for his most against any opponent.

Mariners: LHP Wade LeBlanc (8-5, 3.55 ERA) has one final chance to win a career-best ninth game in a season. He won eight games in 2010 with San Diego. It will also be his 27th start for Seattle, which will be a career high. LeBlanc took the loss Sunday against the Rangers.