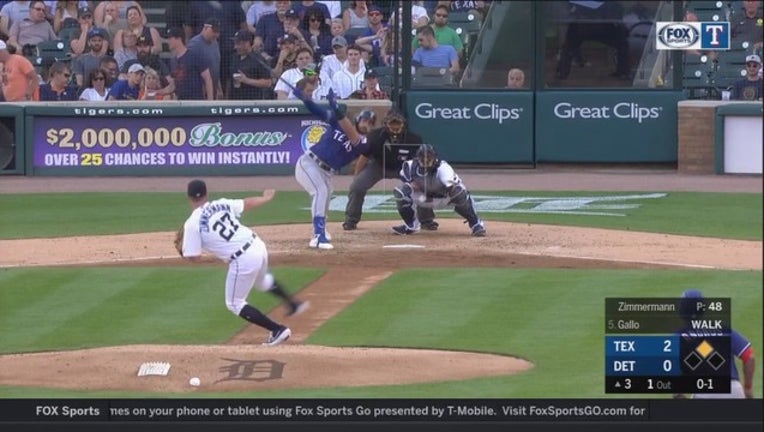 DETROIT (AP) - Before the game, Texas manager Chris Woodward said that if Jesse Chavez could pitch efficiently enough, he could last five or six innings.

The right-hander surpassed that.

Chavez pitched into the seventh in his longest outing in over two years, and the Rangers became the latest visiting team to win in Detroit, beating the Tigers 5-3 on Tuesday night. Detroit has lost 18 of its last 20 home games, and that does not include a game last month that was suspended with the Tigers trailing.

Chavez (3-2) allowed an unearned run and five hits in 6 1/3 innings, striking out seven with no walks. The right-hander has pitched mostly in relief this season. This was his fifth start, and he didn't go more than three innings in any of the previous four.

"He pitched a lot like we've been seeing out of the bullpen," Woodward said. "It was our first test at getting some serious length."

Chavez's most recent appearance before Tuesday was a five-inning relief outing against Cleveland. Then he made it through 79 pitches against Detroit.

Tuesday was his longest outing since he went seven innings on June 16, 2017.

"You just try and get the guys in the dugout as quick as you can," Chavez said. "With our offense, who knows what they can do every inning? It's unbelievable. I figure if I get out off the mound as quick as I can, give those guys a chance, then good things will happen."

Ronald Guzman homered for Texas, and Ronny Rodriguez went deep in the ninth inning for Detroit.

"No one is going to feel sorry for you," Tigers manager Ron Gardenhire said. "We know where we're at right now. We're not winning ballgames, we're not hitting, and we're still making errors. We keep seeing a couple errors a night. We've got to get rid of those errors."

Nomar Mazara opened the scoring for Texas with an RBI single in the first, and Logan Forsythe added a sacrifice fly later that inning. Joey Gallo - back from the injured list after missing over three weeks with a left oblique strain - added an RBI double to make it 3-0 in the third.

Guzman hit a solo homer in the sixth. Detroit answered with a run in the bottom of that inning, when shortstop Elvis Andrus' throw to first got away for an error.

Guzman hit a sacrifice fly in the eighth.

Rodriguez hit a two-run homer with two outs in the ninth to make it 5-3.

The Rangers were without Asdrúbal Cabrera, who was starting a three-game suspension for hitting an umpire with equipment.

Locke St. John relieved Chavez and retired the last two batters of the seventh in his big league debut.

"I'd say when I got halfway to the pitcher's mound is when I kind of lost feeling in my legs," the 26-year-old left-hander said. "But I gained it again when I stepped on the mound. I just tried to breathe."

The Tigers announced that they have agreed to terms with right-hander Ted Stuka, their 14th-round pick in this year's draft. Texas announced the signing of right-handers Anthony Hoopii-Tuionetoa (30th round) and Nick Yoder (34th round).

Rangers: Gallo also drew a walk and struck out three times in his return. ... Woodward said Hunter Pence (right groin strain) is unlikely to be activated when he's eligible Thursday. Woodward said the veteran outfielder is more likely to return after the team's series at Tampa Bay this coming weekend.

Rangers: Mike Minor (7-4) starts for Texas on Wednesday night against the Tigers.

Tigers: Detroit sends Matthew Boyd (5-5) to the mound. Boyd has quality starts in 10 of his 16 starts this year.