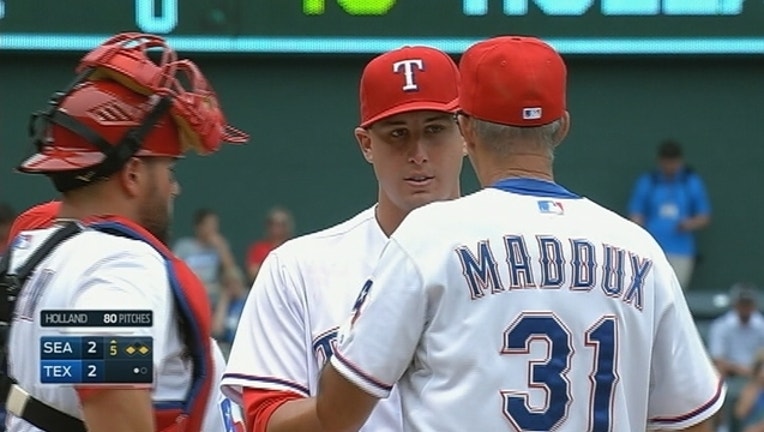 While never able to solve Seattle's ace this season, the Rangers still have a 1 1/2-game division lead with 13 games to play after a 9-2 loss to the Mariners on Sunday.

"We knew today was going to be a tough day," manager Jeff Banister said. "We had him where his pitch count was kind of in our favor, and you saw some frustration in him along the way. But once he got the lead, he does what he always does."

Hernandez (18-9) pitched into the sixth inning to become American League's first 18-game winner, including five wins in five starts this season against Texas, and Robinson Cano drove in four runs for the Mariners.

Texas finished a 7-3 homestand that included a four-game sweep over Houston that boosted them over the Astros for the division lead.

Banister called the final scheduled off day Monday an opportunity "to have a mental break, not an exhale moment." The Rangers open a three-game series Tuesday in Oakland, then play three games in Houston.

"It was a good homestand for us. We've played good baseball, we're in a great position," Mitch Moreland said. "We're right where we want to be, feeding off of each other, and just going to continue to try to do that, and make the road trip go like the homestand was."

Holland allowed 12 runners in 4 1-3 innings, giving up seven runs and five walks (one intentional) while benefiting from three double plays. The left-hander has given up at least five runs in each of his last three starts.

"It's just very frustrating," Holland said. "We're in a playoff race here, and I'm supposed to be a guy that you can count on and I'm not showing it right now."

Hernandez gave up two runs, struck out five and matched a season high with five walks in 5 2-3 innings before leaving after 105 pitches with a stiff right elbow, a move the Mariners called precautionary. He is expected to take his next turn as scheduled at the Angels next weekend, when he could match a career best with a 19th victory.

King Felix is 5-0 with a 1.83 ERA against Texas this year, only the fifth pitcher since 1972 to beat the Rangers five times in the same season. He is the first to accomplish the feat since Bartolo Colon was 6-0 for the Angels against Texas in 2004.

Moreland hit his 22nd homer for Texas, a one-out solo shot to center in the second. Elvis Andrus had a bloop RBI single against a drawn-in infield after Rougned Odor's one-out triple in the fourth.

After Hernandez snagged Adrian Beltre's liner to end the fifth, he immediately tossed the ball to Beltre, his friend and former teammate. "I was just trying to help him give it to fans. The crowd got a little upset, but it was something between him and me," Hernandez said with a smile. In his first at-bat Sunday, Beltre stepped in the box with a smile on his face, and both made gestures to the other.

Seager had three hits and is batting .353 (57 of 165) in 43 games at the Rangers' ballpark, the highest average for any opposing player with at least 150 at-bats. ... Shin-Soo Choo walked twice and reached base in 18 of his last 24 plate appearances for Texas. He went 12 of 18 with five walks and a hit by pitch in that span.

Mariners: Stefen Romero became the eighth Seattle player to start in center this season. McClendon said Gutierrez, who has started 450 major league games in center, wasn't an option to shift from left because of his health. Gutierrez missed last season and started this season in the minors treating a condition that causes vertebrae to fuse together.

Rangers: CF Delino DeShields was out of the lineup a day after leaving Saturday's game with a bruised left knee. Manager Jeff Banister said it was a previously planned day off, and DeShields said he was fine.

Mariners: Seattle travels to Kansas City, where the team will have an off day Monday before three games against the Royals.