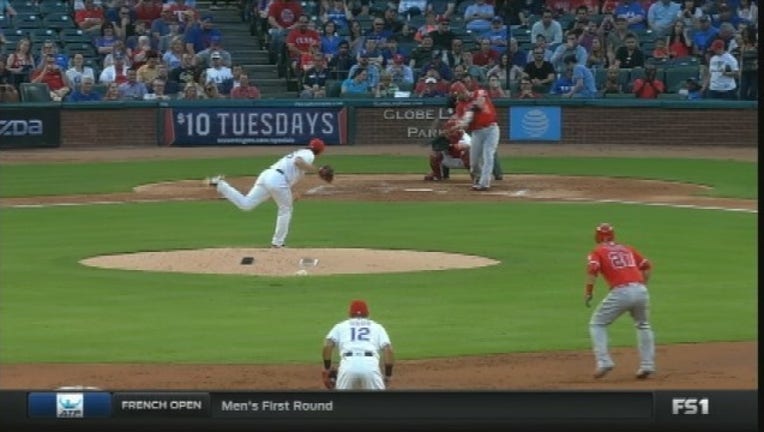 ARLINGTON, Texas (AP) - Mike Trout wasn't getting a chance to hit another go-ahead homer for the Los Angeles Angels.

Instead, Albert Pujols did - and made the Texas Rangers pay.

On the fifth-year anniversary of his last call-up from the minor leagues, two-time AL MVP Trout - who had already homered earlier - was walked in the eighth inning of a tie game. Pujols then hit the next pitch for a three-run homer that pushed the Angels to a 6-3 victory Friday night.

"We weren't giving into Trout at all," Rangers manager Jeff Banister said. "Look, there was a situation there, he had hit the ball hard a couple of times, and we were not going to give in there. Move on to Pujols."

Pujols' third homer of the season came off Jeremy Jeffress (0-2), who had already allowed a single to Kole Calhoun before pitching around Trout.

"Albert is going to be Albert. Big situations, he comes up clutch, and his first few at-bats, missing a few pitches he usually hits," Trout said. "But he was aggressive on that at-bat and got a pitch to hit."

Trout went 3 for 4, made an acrobatic catch in the bottom of the seventh, an inning after his two-run homer for a 3-1 lead. The 25-year-old Trout is hitting .355 with seven homers and 17 RBIs.

Los Angeles quickly led 1-0 after Yunel Escobar went deep on the first pitch of the game.

Deolis Guerra (1-1) picked up the win after a striking out two in a scoreless seventh inning.

Jose Alvarez worked a perfect ninth, getting his first save in his 157th career game. The right-hander made his MLB debut for Detroit in 2013, and has been with the Angels since.

Angels starter Tyler Skaggs limited Texas to one run and four hits in five innings. He struck out six and left the game after throwing just 76 pitches due to right-side tightness. He felt a pinch between his rib and hip on a curveball that struck out Joey Gallo.

"Everything felt fine but I knew if I pitched through it would get worse," said Skaggs, who threw to only one batter after that.

Nick Martinez allowed five hits and three runs in six innings in his second start in place of A.J. Griffin (gout), who pitched in a minor-league game Friday. Martinez struck out seven without a walk.

Elvis Andrus had an RBI double and scored on Mike Napoli's single in the Texas sixth to tie the game 3-3.

"Maybe the wrong location to throw that pitch. He was able to get on top of that," Martinez said of Trout's home run. "He hits the low ball fairly well. It seems to be his strength."

Texas got its first run on Carlos Gomez's sacrifice fly in the first. That was Texas' first sacrifice fly this season and ended a streak of 49 games without one dating to Sept. 2, 2016. That streak had tied the 1967 Angels for the most in MLB history since the stat was re-introduced in 1954.

Sam Dyson came off the DL (bruised right hand) earlier Friday and pitched for the first time since losing his closer role after his third blown save April 16. Dyson allowed an infield single to Trout in a scoreless ninth. "Look, I felt like Sam was much better," Banister said. "Nothing hard."

Angels: 1B C.J. Cron, who had fouled a pitch off his foot during the at-bat, left the game in the eighth inning running out an infield single. Scioscia said Cron was "hobbled pretty good."

Rangers: RHP Tyson Ross (thoracic outlet syndrome ) is going to pitch from a mound this weekend after dealing with back spasms. ... 3B Adrian Beltre (calf strain) went home to California to spend some time with his family and won't travel to Houston or Seattle, instead returning to Arlington for rehab.

Rangers: RHP Yu Darvish got an extra day of rest after striking out eight in a win against Kansas City on Sunday.