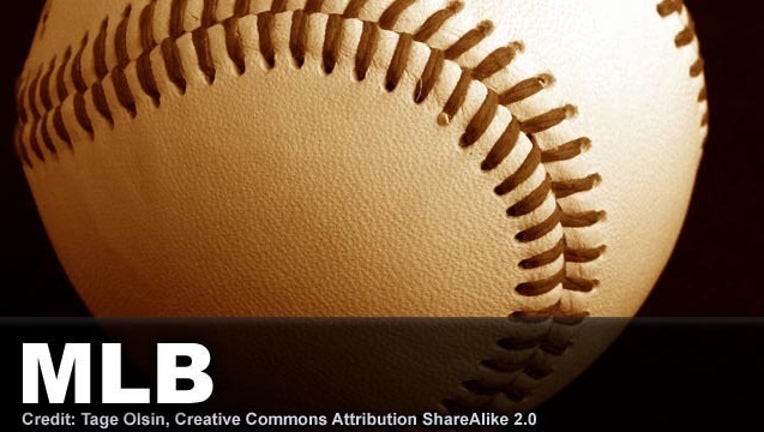 CINCINNATI (AP) -- Mike Trout flashed the skill that puts him at the front of baseball's new generation, just moments after four of the all-time greats had just walked off the field.

Trout became the first player in 38 years to homer leading off an All-Star game, Prince Fielder drove in two runs to show this era is not just about the kids, and AL arms outdueled their more accomplished NL rivals.

A new-look All-Star Game finished with the same old result. The AL beat the NL 6-3 Tuesday night and will open the World Series at home for the 10th time in 13 years.

A season after the retirement of Derek Jeter dropped the curtain on the turn-of-century greats, the 23-year-old Trout was among six starting position players under 25 -- the most since 1965. He was the MVP of last year's game in Minneapolis, when he hit a tiebreaking triple and later a go-ahead double.

This time Trout sent Zack Greinke's fourth pitch, a 94 mph fastball on the outer half of the plate, over the wall in right next to the visiting bullpen for an opposite-field homer.

Fielder and Lorenzo Cain had run-scoring hits in the fifth against NL MVP Clayton Kershaw that put the AL ahead 3-1.

Manny Machado, at 23 another of the sport's fresh faces, hit a double off the right-field wall against Francisco Rodriguez in the seventh and scored on Fielder's sacrifice fly. And Brian Dozier, the last player added to the game as an injury replacement, hit a solo home run off Mark Melancon in the eighth.

Stars old and young gathered in one of baseball's most traditional towns. The Reds became baseball's first professional team in 1869, and players wore caps with horizontal stripes in an attempt at a 19th century feel.

Pete Rose, Cincinnati's hometown hero and baseball's banned career hits leader, was given an 80-second ovation when he walked onto the field before the game to join Johnny Bench, Joe Morgan and Barry Larkin, elected by fans as the Reds' greatest players. Wearing a red jacket and tie and walking stiffly, the now 74-year-old Charlie Hustle was applauded as soon as his image appeared on the video boards, even before he emerged from the AL dugout.

And in the first All-Star Game at Great American Ballpark, which opened in 2003, fans got to see some great ballplayers.

Bench, changed into a blue jacket, returned with Hank Aaron, Willie Mays and Sandy Koufax, voted baseball's great living players by fans as part of the promotion. In a sentimental yet stunning reminder of generational change, Aaron, 81, and Morgan, 71, needed canes to reach the infield, and Mays, 84, was aided on and off the field by an assistant.

Above the field, new Commissioner Rob Manfred watched from a luxury suite, the first All-Star Game not presided over by Bud Selig since 1992.

Many players of the new generation love bling in a manner that puzzles Hall of Famers: Posey wore a gold-colored helmet behind the plate, looking a bit like the Great Gazoo or a Praetorian Guard, accessorizing with a chest protector, shin guards and cleats all with gold-colored trim. Baltimore's Adam Jones was shod in bright orange cleats, and Kansas City's Lorenzo Cain and Washington's Bryce Harper donned golden spikes.

Trout, a Generation Y star with a baby boomer work ethic, completed a unique cycle on a clear evening that followed a heavy afternoon downpour. He singled in his All-Star debut in 2012, doubled to open 2013 game and tripled in the first inning last year. He was just the ninth player to hit for an All-Star cycle in his entire career, joining an illustrious list that includes Hall of Famers Ted Williams, Roberto Clemente, Ernie Banks, George Brett, Mike Schmidt and Mays. Fielder later became the 10th.

No one had homered leading off an All-Star Game since 1977 at old Yankee Stadium, when Morgan connected off Jim Palmer. Greinke, coming off five scoreless outings, had not allowed a run since June 13.

"It's not easy," Greinke said of pitching to Trout. "You've got like a 2-inch window up in the zone. If you throw it higher than that, he takes it. If you throw it lower he does what he did."

Dallas Keuchel, the AL starter with the long, bushy beard, gave up the tying run in the second after Paul Goldschmidt led off with a bouncer to third, reaching on an infield single and taking second as Josh Donaldson threw wildly. Goldschmidt crossed on Posey's groundout and Jhonny Peralta, an All-Star again after serving a 50-game drug suspension two years ago, dumped a two-out single into right field.

"It was the most amped up I've ever been," the Houston star said. "It was just the atmosphere -- the greatest players ever, Pete Rose, Hank Aaron, Willie Mays."

The AL went back on top in the fifth against Kershaw, the first NL pitcher voted the league's MVP since 1968. Fielder lined an opposite-field single to left that scored Trout, who raced home from second to slide in ahead of Joc Pederson's throw, and Cain pulled the next pitch down the left-field line for an RBI double.

Andrew McCutchen homered off Chris Archer in the sixth, cutting the gap to 3-2.

Jacob de Grom of the Mets, the NL Rookie of the Year, struck out Stephen Vogt, Jason Kipnis and Jose Iglesias on 10 pitches in the sixth, reaching 98 mph. ... Reds closer Aroldis Chapman threw 14 of 15 pitches at 100 mph or more in the ninth, reaching 103 mph and striking out the side.

This was the first of at least four straight games in NL ballparks, a departure from the usual practice of alternating leagues for the host. Still, the AL will bat last next year at San Diego and in 2018 at Washington, while the NL has last licks again at Miami in 2017.