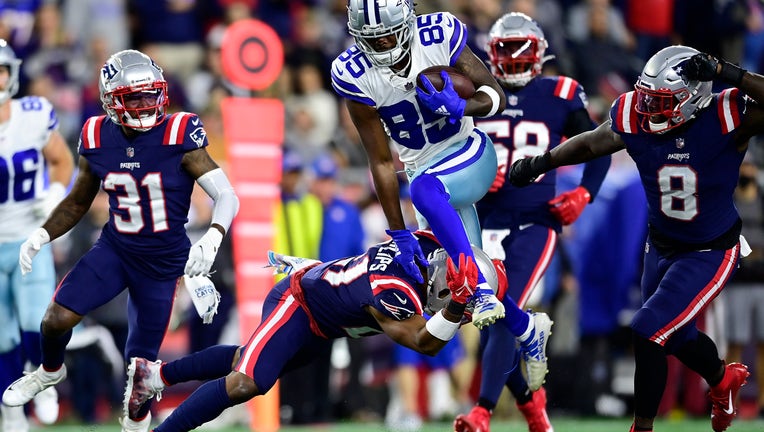 FOXBOROUGH, MASSACHUSETTS - OCTOBER 17: Noah Brown #85 of the Dallas Cowboys leaps over Adrian Phillips #21 of the New England Patriots in the second half at Gillette Stadium on October 17, 2021 in Foxborough, Massachusetts. (Photo by Maddie Malhotra

FOXBOROUGH, Mass. (AP) - Dak Prescott wasn't going to let anything prevent him from enjoying the moment.

While his team celebrated around him after he threw 35-yard touchdown pass to CeeDee Lamb in overtime to beat the New Patriots 35-29 Sunday, the Cowboys quarterback felt pain in his right calf.

It wasn't the perfect ending, but he was willing to accept it after he helped Dallas survive a wild finish and earn its first victory over Bill Belichick's Patriots.

"Just came down funny. Didn't like what I felt," said Prescott, who wore a walking boot to his postgame news conference. "Life keeps throwing punches and I'm gonna keep throwing them back. ... But I'll be fine. I'll promise you that."

Dallas hadn't won at New England since 1987 and was 0-5 against Belichick. The Cowboys (5-1) have won five straight, their longest winning streak since 2016.

The Cowboys led 17-14 entering the fourth quarter, and that's when the fun began. The teams traded five scores in the period, three in the final 2 1/2 minutes.

New England (2-4) was clinging to a 21-20 lead when sensational Cowboys cornerback Trevon Diggs intercepted rookie Mac Jones and returned it 42 yards for a touchdown -- his seventh pick and second pick-six of the season -- to put Dallas ahead 26-20. On the next play from scrimmage, Jones hit Kendrick Bourne for a 75-yard score. Jones then hooked up with Jakobi Meyers for the 2-point conversion.

But Prescott led the Cowboys on a 40-yard drive and Greg Zuerlein's 49-yard field goal sent the game to overtime. Dallas ended it after New England punted on its first possession in OT as the Patriots dropped to 0-4 at home for the first time in Belichick's 22 years as coach.

"We went toe-to-toe with them for 60 minutes," Belichick said. "They just made a few more plays than we did."

Prescott, whose calf injury will be evaluated further on Monday, finished 35 of 51 for 445 yards, three touchdowns and an interception. Lamb had nine catches for 149 yards and two scores.

Jones finished 15 of 21 for 229 yards, two touchdowns and that critical interception, and Damien Harris rushed 18 times for 101 yards and a score.

The Patriots, who came in allowing 19.2 points per game, did a decent job keeping Dallas' second-ranked offense at bay until Prescott broke through in the second half. He hit Lamb for a 1-yard touchdown in the corner of the end zone to make it 17-14 in the third quarter.

Dallas extended its lead on Zuerlein's 45-yard field goal early in the fourth.

But New England responded, getting into the red zone on a 21-yard run by Damien Harris. Five plays later, Rhamondre Stevenson ran it in from 1 yard out and the Patriots nudged back in front.

Dallas had a chance to retake the lead before Diggs' interception, but Zuerlein's 51-yard field goal attempt missed wide left with 2:47 remaining.

New England got the ball first in overtime and picked up one first down, but Jones' pass on third-and-3 was incomplete. The Patriots punted and they didn't get the ball back.

Prescott led the Cowboys 80 yards in seven plays, ending the game when he faked a handoff, rolled right and found a wide-open Lamb, who waltzed into the end zone.

"Just to be able to show the resiliency all night long in all those different moments and be able to have a chance at the end to win it and us to do it speaks volumes," Prescott said.

SLOPPY START
Penalties and turnovers negated touchdowns by both teams in the first half.
Trailing 14-7, Dallas had a 44-yard pass to Cedrick Wilson nullified by a penalty on left tackle Tyron Smith for illegal use of hands.
It was one of five infractions on Dallas in the first quarter, costing the team 56 yards.
The Patriots appeared to add to their lead in the second quarter on a 25-yard TD pass from Jones to Meyers, but that was taken off the scoreboard by their first penalty of the day, a hold on left guard James Ferentz.
Later, with Dallas ahead 14-10, the Cowboys drove to the 1, where they attempted a fourth-down sneak by Prescott. Officials ruled the play a touchdown on the field, but a review showed the ball was knocked free by linebacker Ja'Whaun Bentley and recovered by the Patriots before it crossed the goal line.

MR. DIGGS
Diggs' pick-six was his league-leading seventh interception of the season and second returned for a touchdown, and he tied the NFL record of six straight games with at least one pick to start a season.
Among those who share the record is the late Tom Landry, who coached the Cowboys for their first 29 seasons.

UP NEXT
Cowboys: Have a bye next week.
Patriots: Host the New York Jets next Sunday 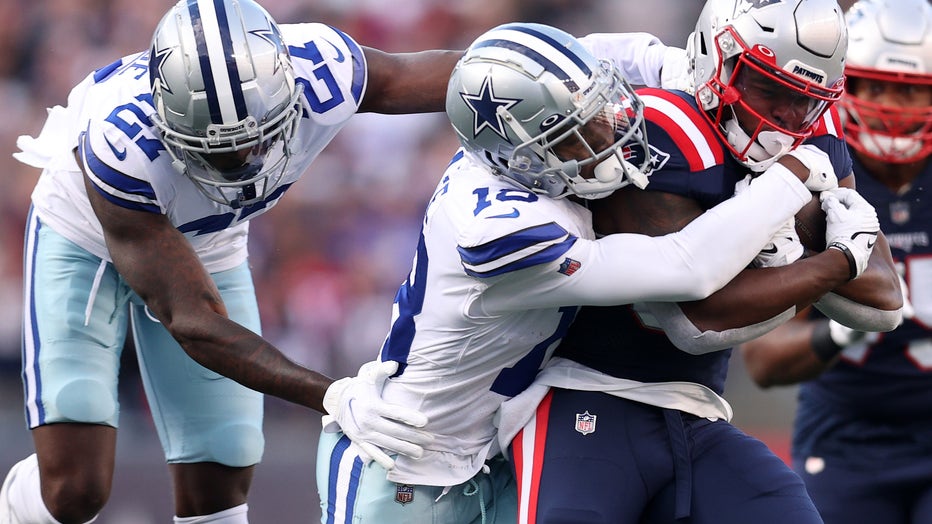 FOXBOROUGH, MASSACHUSETTS - OCTOBER 17: Damien Harris #37 of the New England Patriots is tackled by Damontae Kazee #18 and Jayron Kearse #27 of the Dallas Cowboys in the first half at Gillette Stadium on October 17, 2021 in Foxborough, Massachusetts.