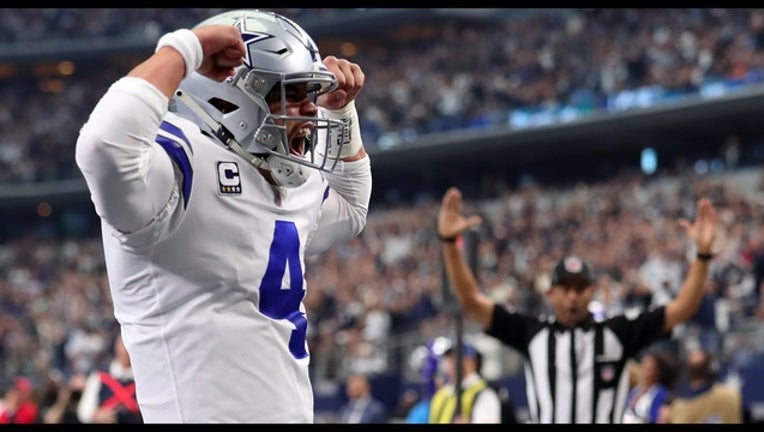 Dak Prescott #4 of the Dallas Cowboys celebrates a touchdown in the first quarter of a football game against the Tampa Bay Buccaneers at AT&T Stadium on December 23, 2018 in Arlington, Texas. (Photo by Tom Pennington/Getty Images)

DALLAS (AP) - Dak Prescott barely played over a three-week span before losing in his postseason debut as a rookie quarterback with the Dallas Cowboys two years ago.

Rust won't be an excuse in his second playoff game against Russell Wilson and the Seattle Seahawks (10-6) on Saturday night.

Not only did Prescott play the entire game with the Cowboys (10-6) already set as the fourth seed in the NFC before a 36-35 win over the New York Giants , he had just the fourth game in his three seasons with at least 40 attempts and a career-high four touchdown passes.

"We can definitely build on this," said Prescott, who was 27 of 44 for 387 yards, capped by a 32-yard score to Cole Beasley on fourth down and a 2-point conversion pass to Michael Gallup. "This was not meaningless to me. It wasn't meaningless to any of the guys that played or even to the guys that didn't play."

Part of the reason it wasn't meaningless to Prescott is that he remembers the slow start in a divisional loss to Green Bay after the 2016 NFL Offensive Rookie of the Year combined with fellow first-year sensation Ezekiel Elliott to lead the Cowboys to an NFC-best 13 victories.

Because an 11-game winning streak had the Cowboys cruising to the NFC East title, Prescott played just two series of a loss at Philadelphia in the regular-season finale going into the playoff bye. Dallas fell behind 21-3 in a 34-31 loss to the Packers that eliminated them.

This year, the Cowboys had to revive their postseason hopes after a 3-5 start, doing it with a five-game winning streak and going 7-1 in the second half. While Elliott sat as expected against the Giants, the offense kept the momentum alive with one of its best showings of the season.

Two Pro Bowl linemen also sat against the Giants in left tackle Tyron Smith and right guard Zack Martin. Both are expected to play against the Seahawks, although Martin had the more challenging situation all season while dealing with a left knee injury sustained in a preseason game.

The defense was without lineman Tyrone Crawford a week after he injured his neck on the second play of a division-clinching win over Tampa Bay. Crawford could be available against Seattle as well after his neck checked out OK at a hospital.

While the Cowboys gave up at least 30 points for the first time this season, the unit that carried them through several wins came up big by forcing four straight incompletions from Eli Manning after Prescott's go-ahead sequence.

"We treat every game like it's our last one, and we're going to be in full attack mode no matter what," linebacker Leighton Vander Esch said. "No matter what the circumstances are, we're just going to carry on into the playoffs."

Prescott led the Cowboys to go-ahead scores twice in the fourth quarter against the Giants. It was actually pretty similar to his one playoff experience against the Packers, when he engineered two tying drives in the final five minutes before Aaron Rodgers took the Packers to the winning field goal on the final play.

The Dallas quarterback just as vividly remembers spending most of the game trying to recover from the early deficit.

"I think you can almost take that year for an example how important the momentum is," Prescott said before beating the Giants. "I think that's what you can turn to as a reason on why we should play and how important it is that people just keep their feet moving and stay active."

That mission was accomplished even before the Cowboys secured their 10-win season.