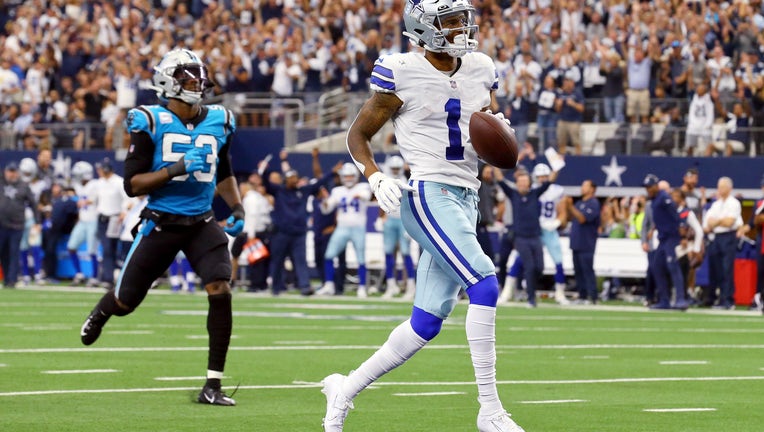 ARLINGTON, TEXAS - OCTOBER 03: Ced Wilson #1 of the Dallas Cowboys scores a touchdown during the third quarter against the Carolina Panthers at AT&amp;T Stadium on October 03, 2021 in Arlington, Texas. (Photo by Richard Rodriguez/Getty Images)

ARLINGTON, Texas (AP) - Dak Prescott threw four touchdown passes, Ezekiel Elliott had his first 100-yard rushing game of the season against the NFL's No. 1 defense and the Dallas Cowboys beat the Carolina Panthers 36-28 on Sunday.

Elliott finished with 143 yards and a touchdown on 20 carries as the Cowboys (3-1) rolled up 245 yards on the ground after the Panthers allowed just 135 total in the first three games.

Leading the Panthers in their first full game without injured star running back Christian McCaffrey, Sam Darnold had two rushing touchdowns to become the first quarterback in NFL history with at least five TDs on the ground in the first four games.

It was a different story for Darnold behind the line of scrimmage before getting hot in the passing game with the Panthers (3-1) trying to erase a 22-point deficit in the fourth quarter in their first loss.

Trevon Diggs had two interceptions for an NFL-leading five while becoming the first Dallas player with a pick in each of the first four games since the 1970 merger.

When he won a tug of war with receiver DJ Moore for the second pick, Diggs gave Dallas, this year's NFL leader in forcing turnovers, multiple takeaways in an eighth consecutive game going back to last season, the longest active streak in the league.

The Cowboys sacked Darnold five times, including two from Randy Gregory, while Dallas kept Prescott upright against a defense that entered the game with an NFL-best 14 sacks.

Carolina's pressure did force Prescott into more incompletions than he's been used to while completing 77.5% of his passes the first three weeks, but he had enough time for scoring passes to four different receivers.

Three of the TDs came in the third quarter to erase a 14-13 halftime deficit as Prescott finished 14 of 22 for 188 yards. His scoring tosses were 18 yards to Blake Jarwin, 35 to Amari Cooper, 6 to Dalton Schultz and 23 to Cedrick Wilson, the last set up by Diggs' first pick.

Elliott set up Schultz's short scoring catch with a 47-yard run, his longest since a 55-yarder as a rookie in 2016. Elliott's game total was the most for the two-time rushing champ since 2018. 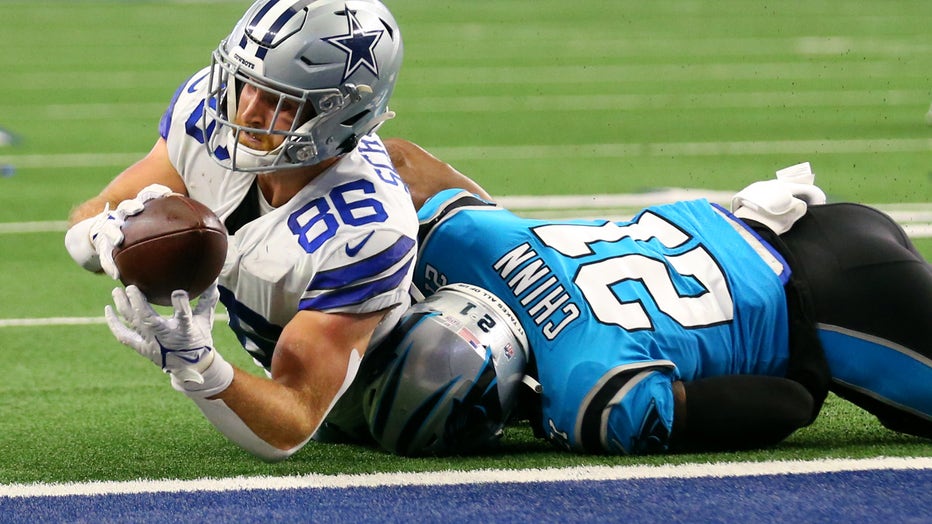 ARLINGTON, TEXAS - OCTOBER 03: Dalton Schultz #86 of the Dallas Cowboys is stopped short of the goal line by Jeremy Chinn #21 of the Carolina Panthers during a two-point conversion try during the second quarter at AT&amp;T Stadium on October 03,

Darnold, who had five rushing TDs in 38 career games with the New York Jets, matched Elliott's 1-yard plunge in the first quarter with a 1-yard option keeper. The Panthers went ahead 14-13 on an 11-yard QB draw. Darnold finished with 35 yards on six carries.

Cooper missed some early series because of a right hamstring injury, but returned to lead Dallas with 69 yards receiving. His TD came when he beat new Carolina cornerback CJ Henderson down the sideline and made the catch while keeping his feet inbounds at the pylon.

Henderson made his Carolina debut after a trade with Jacksonville early in the week, even though he missed his final game with the Jaguars because of a groin injury.

Chubba Hubbard had 13 carries for 57 yards in his first career start with McCaffrey out because of a hamstring injury. But the running game was an afterthought after Diggs' second pick led to Greg Zuerlein's 37-yard field goal in the first play of the fourth quarter for a 36-14 lead.

Panthers: Carolina faces another NFC East team in Philadelphia at home next Sunday.

Cowboys: A three-game homestand with two division games ends next Sunday against the New York Giants.