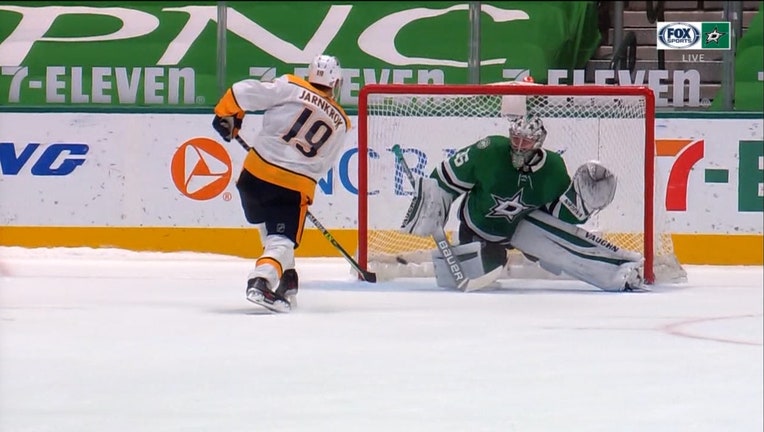 DALLAS - Calle Jarnkrok scored in the fifth round of the shootout and the Nashville Predators finished a franchise-record eight-game road trip the same way they started it, with a 4-3 shootout victory over the Dallas Stars on Sunday night.

Eeli Tolvanen had the tying goal with six minutes remaining in regulation and two assists for his first career three-point game. Ryan Johansen had a power-play goal in the first period, and Filip Forsberg pulled Nashville to 3-2 late in the second.

Rhett Gardner scored his first NHL goal, fellow rookie Ty Dellandrea picked up his third and Radek Faska also scored for the Stars, who lost with a chance to win consecutive games for the first time since starting the season 4-0.

Dallas, the defending Western Conference champion, dropped out of a tie for sixth with Nashville in the Central Division. The top four teams in the division go to the playoffs.

Johansen had the first goal of the shootout before Joe Pavelski pulled Dallas even on its third and final chance. John Klingberg and Jamie Benn for Dallas and Nashville's Tolvanen failed to convert before Jarnkrok's winner gave Nashville a 4-3-1 record on the trip.

Anton Khudobin stopped 19 shots for Dallas a night after recording his career-best third shutout. Pekka Rinne had 27 saves for Nashville.

Gardner scored after Esa Lindell sent a puck off the boards back in front of the net.

Predators: The first of two at home against Detroit on Tuesday.

Stars: A five-game homestand continues Tuesday with the first of two at home against Tampa Bay. The Lightning have won the first three meetings between last season's Stanley Cup finalists.