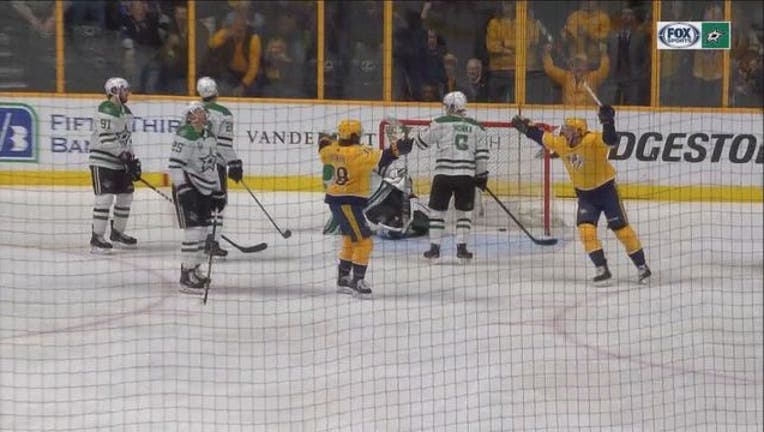 The Predators extended the NHL's longest active winning streak. The defending Western Conference champs also padded their lead atop both the conference and the Central Division.

Rinne recorded his seventh shutout this season, tying Tampa Bay's Andrei Vasilevskiy for most in the NHL. Rinne now is 17-1-1 over his last 19 games.

Nick Bonino scored an empty-netter with 13.6 seconds left after Stars defenseman John Klingberg caught a skate on his own net, causing him to trip and lose the puck.

The Stars, currently in the first wild card spot, lost for the second time in as many nights after falling in overtime Monday night.

Kari Lehtonen made 32 saves for Dallas.

Mike Fisher was in the starting lineup for his first game back in Nashville since being signed on Feb. 26. He received an ovation 10 seconds into the game during a stoppage in play while a catfish was removed from the ice. Fisher went to the box for hooking less than 2 minutes into the game.

The former captain came out of the box, got the puck and fed a pass to Rya Johansen, who was stopped by Lehtonen.

Kevin Fiala hit a post in the first period, and Ryan Ellis hit the post at the end of a power play in the second. Lehtonen, who replaced goalie Ben Bishop after he left Monday night's overtime loss to Ottawa after the first period, turned away shot after shot. Lehtonen got a helping hand from Mattias Janmark to clear the puck away from the goal line late in the 2nd in the midst of a sustained possession by Nashville.

Hartman broke the scoreless tie with a backhander from the left circle over Lehtonen's right shoulder off a feed from Austin Watson. For Hartman, it was his second goal and first at home since the Predators picked him up from Chicago at the trade deadline last week.

Dallas coach Ken Hitchcock took his timeout with 47.6 seconds left and had Lehtonen out for the extra attacker. Klingberg was collecting the puck deep for one last rush when he tripped.

NOTES: Smith played his 500th career game. ... The Predators are outscoring opponents 39-18 in this winning streak. ... With Bishop scratched with a lower-body injury, the Stars recalled G Mike McKenna from their AFL affiliate. They also recalled F Roope Hintz, who was scratched.