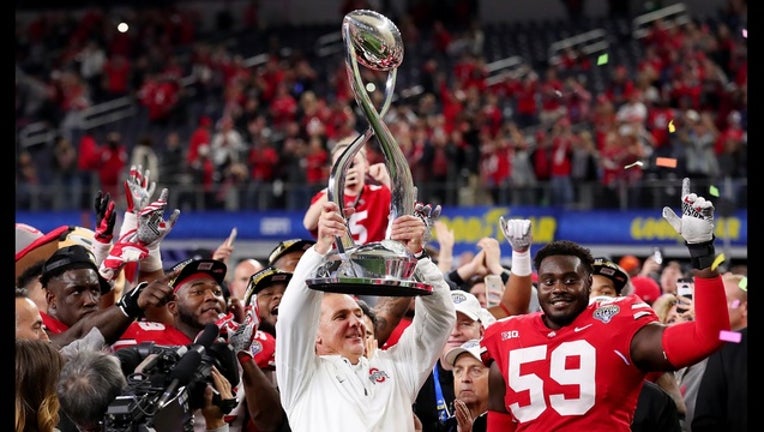 Urban Meyer of Ohio State celebrates on the field after the Buckeyes beat the USC Trojans 24-7 during the Goodyear Cotton Bowl Classic at AT&T Stadium on December 29, 2017 in Arlington, Texas. (Photo by Tom Pennington/Getty Images)

ARLINGTON, Texas (AP) - Playoff-snubbed Ohio State got to raise another trophy in the building where the Buckeyes won a national championship.

While the streaming confetti this time was for a Cotton Bowl victory instead of a title celebration like three seasons ago, coach Urban Meyer still got a special feeling from the fifth-ranked Buckeyes' defensively dominant 24-7 win over No. 8 Southern California.

With Buckeyes All-America junior cornerback Denzel Ward sitting out after deciding to go into the NFL draft, fellow defensive back Damon Webb returned an interception for a touchdown after recovering a fumble to set up an early score.

The Big Ten and Pac-12 champions would usually play New Year's Day in Pasadena instead of deep in the heart of Texas, but the Rose Bowl is a College Football Playoff semifinal game this season.

Ohio State (12-2) instead quickly settled in at the NFL stadium where it won the first national championship in the four-team CFP format. The Buckeyes - with that bad loss at Iowa after an early setback to playoff team Oklahoma - were the first team left out this season.

USC (11-3), the Rose Bowl champion last season, lost for only the third time in its last 23 games. The Trojans had four turnovers that led to 21 Ohio State points in what could have been third-year sophomore quarterback Sam Darnold's final game.

"We kind of shot ourselves in the football in this game," USC coach Clay Helton said. "You're putting a hurt on your defense, and it led to points early in the game, and separation early in the game."

Ward was on the sideline in his No. 12 jersey over street clothes while Webb had a fumble recovery on the third play of the game. That led to J.T. Barrett's 1-yard keeper for a score that put the Buckeyes ahead to stay.

Webb's 23-yard interception return for a TD put Ohio State up 17-0 less than a minute into the second quarter. It was the first pick-six this season for the Buckeyes, and the team-leading fifth interception for Webb.

Ohio State was up 24-0 when Barrett ran 28 yards for another touchdown after the first of Darnold's two fumbles when stripped while being sacked. Darnold was sacked eight times overall.

"The strip fumbles, when I'm in the pocket, those are though," Darnold said.

"That defensive line took a quarterback that we have a tremendous amount of respect for and he didn't set his feet all night," Meyer said. "That's the way we won that game."

Ohio State: Barrett, playing his final college game only about a two-hour drive from his hometown of Wichita Falls, Texas, broke Drew Brees' Big Ten career record for total offense with 12,697 yards. Barrett played 50 games and was 38-6 as a starter. His 147 touchdowns (104 passing, 43 rushing) are also a Big Ten record, 41 more than Brees at Purdue.

"It's pretty crazy. I mean, since I was little I looked up to Drew Brees," Barrett said. "To pass a record like that, just very grateful to the people that were around me."

USC: Darnold, who became the first Trojans quarterback ever with more than 4,000 yards passing in a season, has until Jan. 15 to decide if he will head to the NFL or return to USC for another season.

"I'm really just focused on just hanging out with my teammates for the next couple of days," Darnold said. "But it's tough. I'll look at everything and make my decision after that."

Darnold was 26 of 45 for 356 yards passing, but his turnovers were costly.

NOT FOR THE ROSES

This was the eighth time Ohio State and USC met in a bowl game. The first seven were in the Rose Bowl. The Trojans had won seven straight in the matchup of powerhouse programs, including four regular-season matchups since their last meeting in Pasadena 33 years ago.

There was a bit of a scuffle in the final two minutes after Buckeyes linebacker Malik Harrison delivered a late hit on Darnold, who was getting out of bounds along the USC sideline after scrambling for 7 yards. Several Trojans went to Darnold's defense, including one ejected for coming off the bench. Harrison was assessed a personal foul penalty.

Ohio State will play its 2018 opener at home against Oregon State on Sept. 1, the same day Southern Cal is home against UNLV. The Buckeyes and Trojans both return to the Lone Star State for games next Sept. 15. Ohio State will be back in AT&T Stadium to play TCU, and USC will be at Texas that day to take on the Longhorns.