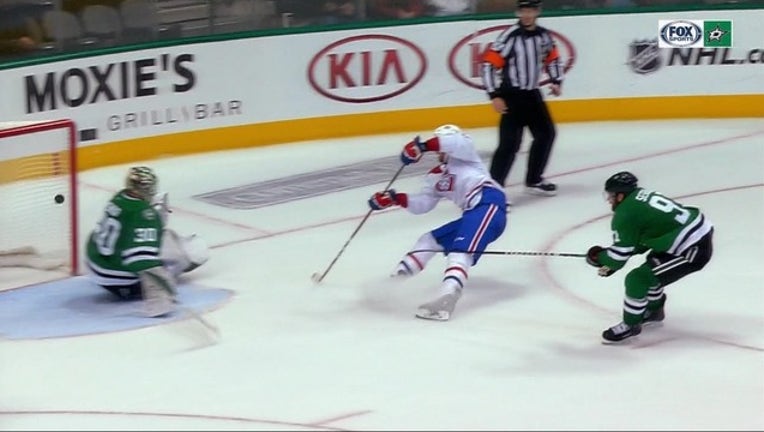 DALLAS (AP) - Jeff Petry scored 14 seconds into overtime after Phillip Danault had both Montreal goals in regulation and the Canadiens rallied for a 3-2 victory over the Dallas Stars on Monday night.

Danault's two goals came nine days after getting a hat trick in a 4-3 overtime win at Vegas, giving him five of his seven goals this season in that span.

After the opening faceoff of 3-on-3 overtime, Paul Byron skated up the left side and slipped the puck across the ice to Petry, who easily beat Ben Bishop for his eighth goal.

Jamie Benn and Tyler Seguin were on the ice for the Montreal's winning goal in their first loss since the high-priced forwards were harshly criticized by their front office. Benn scored his team-leading 16th goal on an assist from Seguin for a 2-1 lead in the second period.

Antii Niemi stopped 45 shots against his former team in his third straight start and second win since Carey Price was sidelined with a lower-body injury.

Danault's tying tally early in the third period came when he collected an errant shot behind the net and stuffed the puck between Bishop's pad and the post on a wraparound. His first goal for a 1-0 lead came on a loose puck just outside the crease as he was falling to the ice.

Benn's goal came on a power play after his brother, Jordie Benn, was penalized for hooking.

The Stars have split two games since expletive-laden rants against Benn and Seguin by club CEO Jim Lites. The critique that the two players on expensive long-term contracts were underperforming for a team falling short of expectations drew a rebuke from the NHL players' union.

While Seguin and Benn are still two of the top three scorers on their team, they're not on a pace to be among the top 25 in the NHL, which they've been in five previous seasons together. Seguin's assist on Benn's goal was his team-leading 23rd.

Radek Faksa pulled Dallas even at 1-1 in the second period when he put a wrist shot over Niemi's glove on a pass from Valeri Nichushkin. Bishop had 35 saves for Dallas.

NOTES: It was the 20th consecutive season for the Stars to play at home on New Year's Eve. They are 12-6-2 in those games. It was Montreal's second New Year's Eve visit. The previous one was a 1-1 tie in 2003. ... Stars D Connor Carrick played for the first time since Oct. 28. He's been out with a foot injury. ... Canadiens C Andrew Shaw didn't return after the first period because of an upper-body injury.