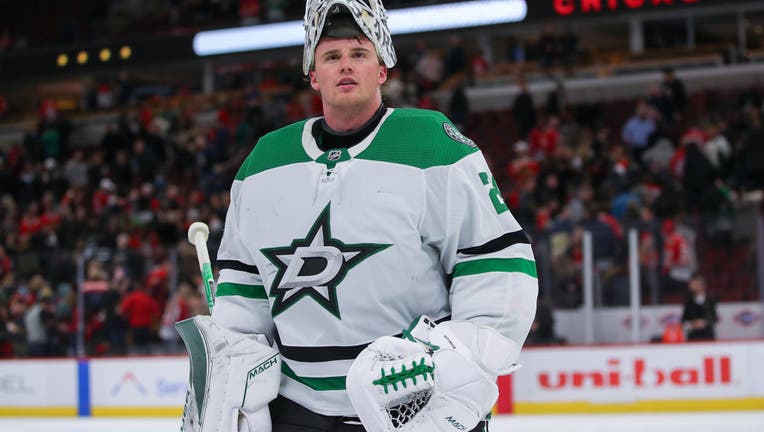 CHICAGO, IL - FEBRUARY 18: Dallas Stars goaltender Jake Oettinger (29) looks into the crowd after a game between the Dallas Stars and the Chicago Blackhawks on February 18, 2022 at the United Center in Chicago, IL. (Photo by Melissa Tamez/Icon Sports

CHICAGO (AP) - Jacob Peterson got fancy to score the winning goal for the Dallas Stars.

He just about had to.

Until then, Chicago's Marc-Andre Fleury had stopped everything in the first 65 minutes and four of the first five Stars shooters in the shootout. But Peterson skated in, faked Fleury and slid a backhand between his legs in the bottom of the sixth round to earn the Stars the 1-0 victory Friday night.

"I tried that (move) before, actually, in the preseason, and it worked," Peterson said. "So I thought, ‘Let’s try it again.'"

The puck found the back of the net against Fleury, who had made spectacular saves against Jason Robertson and Roope Hintz in regulation.

"Too bad about that goal at the end," Fleury said. "We were right there."

Dallas' Jake Oettinger, who wears No. 29 in honor of Fleury, stopped Jake McCabe to start the sixth round.

"Fleury, he made some phenomenal saves for them, but Jake made the big saves at the right time," Dallas coach Rick Bowness said.

Chicago’s Alex DeBrincat and Dallas’ Robertson scored in the first shootout round. After that, Fleury and Oettinger each stopped four shots. Then Oettinger stopped McCabe, which opened the way for Peterson.

"Fleury knows all our guys," Bowness said. "So throw somebody out there that he has no idea what he’s going to do."

Oettinger made 34 saves in regulation and earned his eighth career shootout, and first this season.

The 37-year-old Fleury made a handful of impressive saves among his 27 stops in regulation, getting credit for his 71st career shutout and fourth of the season.

Two of Fleury’s saves in particular stood out. He kicked out his right leg to take a sure goal away from Robertson with 2:33 left in the first period, the puck fluttering over the net. He then topped himself with 6.5 seconds left in the second, sliding across to grab Hintz’s point-blank drive. That one had Hintz shaking his head and the crowd roaring in approval.

"I thought there were only one or two seconds left," Hintz said. "I shot it too fast."

Fleury was fortunate 23 seconds into overtime, when Tyler Seguin’s poke as he was falling went off the crossbar.

Patrick Kane was stopped by Oettinger from 15 feet out 3:05 into overtime.

Two of the Blackhawks’ best chances came on the same shift midway through the third period. Dylan Strome’s screen shot just skittered past Oettinger and the left post. And 16 seconds later, Oettinger managed to deflect DeBrincat’s 12-footer to the side.

The Blackhawks, 3-6-1 in their previous 10 games, again suffered from a paucity of scoring. In five of their previous nine losses, they scored either one goal or were shut out.

The Stars had won their previous five road games, including a 4-1 victory in Colorado on Tuesday when they managed only 20 shots on goal.

NOTES: Neither team scored on the power play, the Stars with three chances and the Blackhawks two. ... After getting two goals and two assists in Dallas’ win over Colorado on Tuesday, C Joe Pavelski was held without a point for the seventh time in eight games. ... Chicago captain Jonathan Toews, out because of a concussion for eight games, was placed on injured reserve retroactive to Jan. 26. Blackhawks F Jujhar Khaira, who missed his 12th straight game, was moved to long-term injured reserve.

Stars: visit Arizona on Sunday, then play three of the next four at home.

Blackhawks: continue their five-game homestand against Florida on Sunday, and host New Jersey and St. Louis next week.