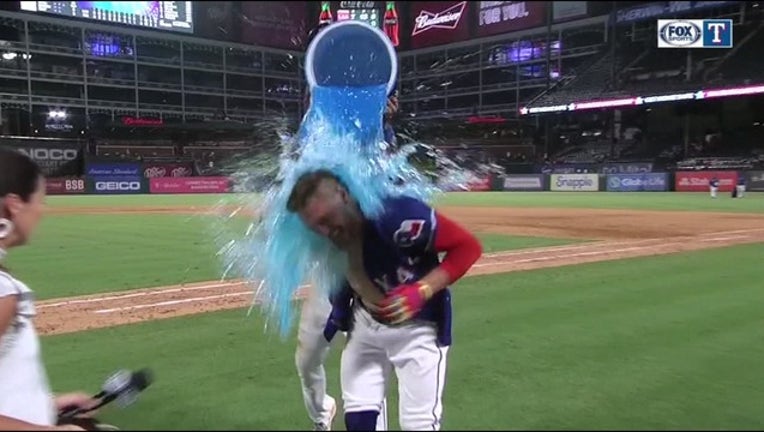 ARLINGTON, Texas (AP) - Hunter Pence drove in three runs, including an RBI single in the ninth inning that pushed the Texas Rangers past the Los Angeles Angels 8-7 on Wednesday night.

Elvis Andrus led off the ninth with a single up the middle off Trevor Cahill (3-8), the seventh Angels pitcher. After two wild pitches got Andrus to third, Pence grounded a single through the left side of the infield.

Texas, which twice earlier in the game blew two-run leads, overcame a late three-run deficit. Pence had a two-run double in the seventh, after striking out his first three at-bats, and Shin-Soo Choo's RBI single tied in the eighth.

The Rangers won three times in the four-game series. All of the wins came in their final at-bat, including 11-inning wins in the series opener Monday and the second game of a doubleheader Tuesday.

Jonathan Hernández (1-0) worked the final 2 1/3 innings to win in his major league debut. It was the second night in a row a Rangers reliever got his first big league win.

Los Angeles went ahead 7-4 with a three-run sixth, including two runs coming home on the same play that Justin Upton had a sacrifice fly.

With the bases loaded with one out, after an intentional walk to Mike Trout, Upton hit his sac fly. Left fielder Willie Calhoun's throw home was well off target before catcher Jeff Mathis tried to pick off Trout, but first baseman Danny Santana misplayed the ball for an error that allowed a second run to score.

That ended the night for All-Star lefty Mike Minor, whose ERA rose from 2.94 to 3.17 after he allowed seven runs and 10 hits - both season highs. He struck out seven and walked two.

The Angels tied the game 4-all with two outs in the fifth when Albert Pujols had a tying two-run single that ricocheted off the top of the eight-foot wall in right. Pujols thought he had his 20th homer, but the ball was ruled in play when it bounced back onto the field, and that stood after a crew chief replay review.

An inning earlier, Los Angeles got even at 2. Pujols doubled and scored on Brian Goodwin's double before Wilfredo Tovar's RBI groundout.

Willie Calhoun hit his 13th homer for the Rangers in the second. Rookie Nick Solak had two doubles, scoring three times and drove in a run in his third big league game.

Hernández became the 13th pitcher to make his MLB debut with the Rangers this season. The previous club record had been 10 debuts in 2014. ... The Angels finished 109-117 overall at the Rangers' ballpark in its 26th season, and will be the first visitor when Texas plays its first 2020 regular season home game in its new stadium across the street.

Angels: RHP Griffin Canning (elbow inflammation) returned to California and will be placed on the injured list for the second time this month. ... RHP Keynan Middleton (right elbow UCL injury) could be close to joining the Angels for the first time this season. Manager Brad Ausmus said a decision could be made after Middleton makes his next rehab appearance.

Angels: After a day off Thursday, the Angels open a three-game weekend series at AL West-leading Houston, where they have lost seven of their last eight games.

Rangers: RHP Ariel Jurado (6-9), who has lost his last three starts, is scheduled to pitch the opener Thursday night of a four-game series at the Chicago White Sox.