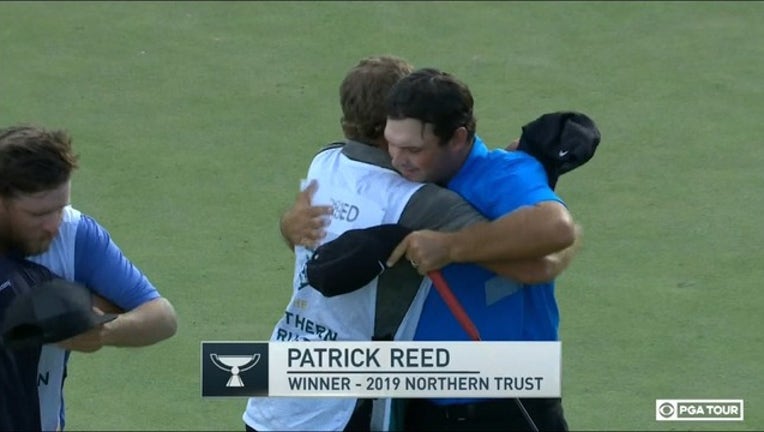 Reed fell behind early, was still two shots behind on the back nine at Liberty National and then rolled in three straight putts - one for par, two for birdies - that allowed him to overtake Jon Rahm and hold off Abraham Ancer to win The Northern Trust.

Reed closed with a 2-under 69 after a breezy afternoon in which a half-dozen players were in the mix on the back nine.

"It's been a little too long," said Reed, whose last victory was the 2018 Masters. "What better place to do it than here. It's definitely a good time to get a 'W.'"

Reed had such mediocre results by his standards that he began the FedEx Cup playoffs at No. 50 and was only assured of two events. Points count four times as much in the playoffs, so the victory vaulted him to No. 2 in the FedEx Cup. His place at the Tour Championship is secure. His odds of the $15 million prize increased greatly. It still wasn't enough for him to get in the top eight automatic qualifiers for the Presidents Cup, which will be decided after next week. He finished at 16-under 268 and won for the seventh time on the PGA Tour.

Ancer felt like a winner when it was over. He also played bogey-free over the final 12 holes, and his birdie on the 17th gave him hope. But his approach to the 18th came down below a ridge, and his long birdie putt to force a playoff went some 6 feet by the cup. He made that for a 69 to finish second, his best PGA Tour finish.

That was enough to send him from No. 67 to No. 8, with more perks that he could count. Ancer is a lock to make it to the Tour Championship in two weeks, meaning he earns his first spot in the Masters. He wrapped up a spot on the International team for the Presidents Cup, making him the first Mexican in the event.

Hur finished at 20-under 264 at The Renaissance Club. She shot a 62 in the second round, taking just 24 putts.

The 21-year-old Valenzuela will be a senior at Stanford University. She also lost in the 2017 final, falling 6 and 5 to Sophia Schubert at San Diego Country Club. Ruffels beat another Stanford player, Andrea Lee, in the semifinals.

Hoag birdied the final two holes for a 6-under 65 and a two-stroke victory on Pumpkin Ridge Golf Club's Witch Hollow Course. The 31-year-old former Ohio State player jumped from 31st to seventh in the standings, earning $144,000 in the regular-season finale.

Oregon native Scott Harrington was second after a 69. He also played his way into the top 25, going from 38th to 19th.

Norway's Kristoffer Ventura (69) was third at 19 under. He went from seventh to fourth in the standings.

Hayden Buckley parred the first hole of a playoff with Sam Fidone to win the Mackenzie Tour's ATB Financial Classic in Calgary, Alberta. Buckley shot a 1-under 70 to match Fidone (67) at 18 under. ... Calum Hill won the Made in Denmark Challenge for his second Challenge Tour victory in three events. The Scot finished with a 5-under 67 for a 22-under 266 total. Joel Sjoholm was a stroke back after a 68. ... Han Ran Ryu shot a 6-under 66 for a two-shot victory in the Jeju Samdasoo Masters on the Korean LPGA. ... Seon Woon Bae closed with a 3-under 69 and made birdie on the first playoff hole to beat Teresa Lu and win the Hokkadio Meiji Cup on the Japan LPGA. Women's British Open champion Hinako Shibuno tied for 13th. ... Robynn Ree won the PHC Classic in Milwaukee for her second Symetra Tour victory of the year. She closed with a 6-under 66 to finish at 17-under 199, three strokes ahead of Vicky Hurst.