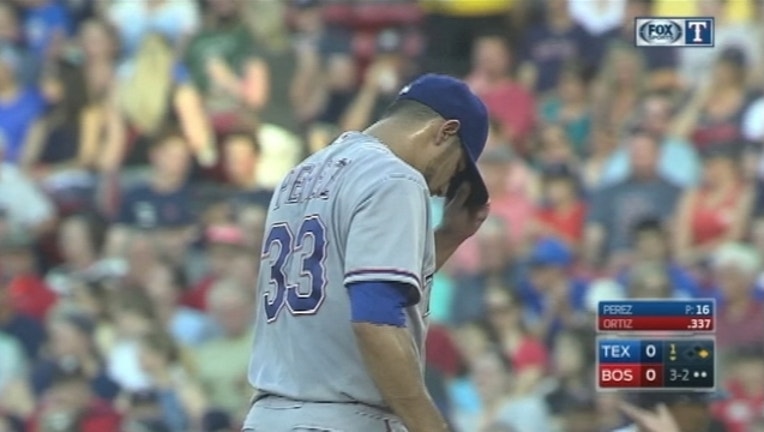 Bryce Brentz drove in three runs with two singles and Ryan Hanigan had a two-run single for the Red Sox, who took two of three from the AL West-leading Rangers.

Prince Fielder hit a two-run homer for Texas, which has lost six of eight and finished a 10-game, three-city trip at 5-5.

Wright (10-5) gave up six runs — five earned — and was pulled after Ian Desmond's two-run triple with no outs in the seventh. The 31-year-old knuckleballer was voted an All-Star for the first time in his career.

Ortiz made it 2-0 in the first with his 523rd homer, a drive over the bullpens in right. He's hit over 20 homers in each of his 14 seasons with Boston after exactly 20 his final year with Minnesota in 2002. The 40-year-old slugger has said he's retiring after this seaosn.

The Red Sox opened an 11-1 lead by scoring five runs in the second, two in the third and two more in the fourth.

In the second, they scored all the runs on two hits, capitalizing on three errors for four unearned runs. Hanigan had a bases-loaded, two-run single, Mookie Betts an RBI double and Ortiz a sacrifice fly.

In the third, Brentz had an RBI single and he added a two-run single the next inning.

The Rangers' infield committed all three errors in the second — one each by second baseman Rougned Odor, shortstop Elvis Andrus and third baseman Adrian Beltre.

Rangers: 1B Mitch Moreland missed his fourth straight game (tight right calf). . Manager Jeff Banister said OF Shin-Soo Choo told him he was ready to play after leaving Tuesday's game with a tight lower back, but was "cautious with him because we have missed some time with him."

Red Sox: LF Brock Holt got the night off to rest. . 3B Travis Shaw left with a bruised left foot and was scheduled for what the team called "precautionary X-Rays" Thursday.

Rangers: RHP Chi Chi Gonzalez (0-1, 9.53 ERA) is slated to start Thursday when they return home to open a four-game series against the Twins and RHP Tyler Duffey (4-6, 5.62). It's their only series at home in a four-week stretch.