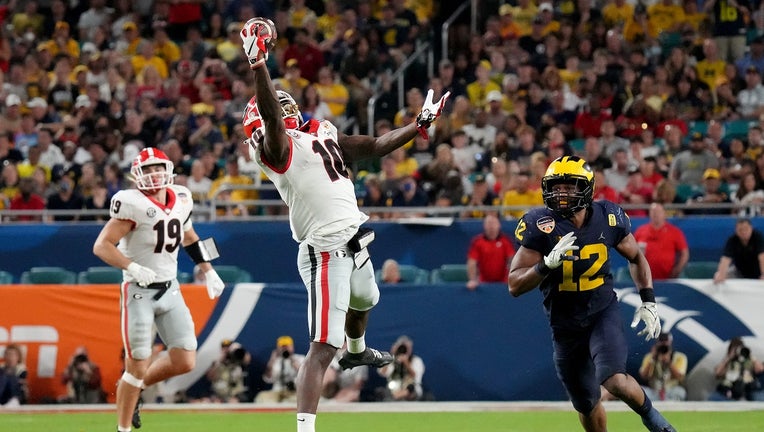 Kearis Jackson #10 of the Georgia Bulldogs makes a catch in the third quarter of the game against the Michigan Wolverines in the Capital One Orange Bowl for the College Football Playoff semifinal game at Hard Rock Stadium on December 31, 2021 in Miam

MIAMI - It might have been the Orange Bowl, but folks were certainly seeing a lot of red. Georgia dominated Michigan to claim the Orange Bowl trophy and to continue on to the CFP Championship game.

Georgia seemed to come out on the field mad but determined to prove why they were ranked No. 1 and remained undefeated most of the season until the SEC Championship Game.

The Bulldogs lost to Alabama, their only loss of the season, but now they have their chance at a rematch. The cards seem stacked against the Dawgs with the Crimson Tide being the team that knocked them to No. 3. It also will be Alabama’s sixth national championship game in seven years. ‘Bama has had the most playoff appearances, the most wins, and the most championships, but the Bulldogs are determined to be back on top.

Georgia has only made it to the Championship once since 2014 and it was against then-No. 4 Alabama. Georgia was ranked No. 3 that year as well. This year, Alabama took the top spot and made it past non-P5 Cincinnati, but as Georgia learned a few short weeks ago, no team can stay on top forever.

Alabama will be seeking a seventh national championship in the last 13 years under Saban. Georgia is playing with hopes of claiming its first national title since Herschel Walker led the Bulldogs to the title in the 1980 season.

This matchup comes after Alabama — big underdogs entering that game — had little trouble in what became a 41-24 win over Georgia in the SEC championship game back on Dec. 4, costing the Bulldogs a chance at an undefeated season and giving the defending national champion Crimson Tide a trip back into the playoff mix.

"For our team, it was a wakeup call," Georgia offensive lineman Jamaree Salyer said that night. "I think we needed one. We got a wakeup call from a really good team. If we get a chance in the playoffs, I think that wakeup call will help propel us forward."

Oh, the Bulldogs were awake on Friday night.

They blew out Michigan 34-11 in the Orange Bowl, taking the field not long after Alabama had little trouble dismissing Cincinnati 27-6 in the other CFP semifinal at the Cotton Bowl.

"To have another opportunity to play for a national championship ... it’s like a dream come true," Alabama running back Brian Robinson Jr. said after the Cotton Bowl.

Predictably, the Tide didn’t do much talking about Georgia following their win. Most teams would never go down that road, talking about an opponent in tournament play before the next matchup is actually set. But Georgia, playing the later game on Friday, probably could have let Alabama begin entering its thoughts probably somewhere around halftime when the Bulldogs had a 27-3 lead over the Wolverines.

Due respect to Michigan, by then, it was clear: The All-SEC rematch was happening. The first CFP title game saw Ohio State defeating Oregon. All seven editions since have featured at least one SEC team — Alabama six times, LSU once, and now Georgia twice.

Alabama has gone 3-2 in its previous CFP title game appearances, alternating wins and losses every time. Nobody in the CFP era has won back-to-back titles; Alabama is 0-2 in its opportunities to do so, and Clemson also lost when it had a bid for consecutive CFP crowns.

Georgia can only hope that trend continues.

Not only is this an SEC title game rematch, but it’s also a rematch of the best — or at least, closest and arguably most dramatic — title game of the CFP era, now in its eighth season. 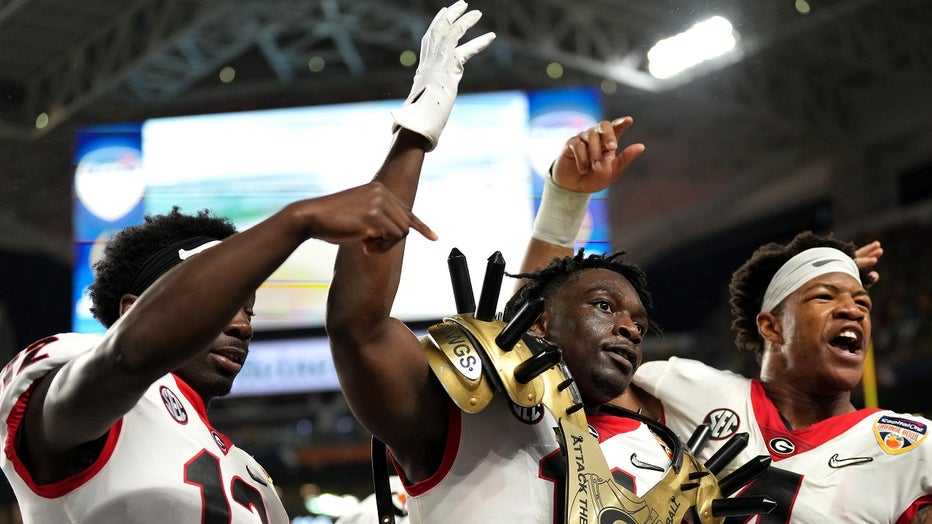 Alabama and Georgia played for the CFP crown in Atlanta to close the 2017 campaign. Georgia led 13-0 at the half, but Tua Tagovailoa came off the bench and threw a game-ending 41-yard touchdown pass to DeVonta Smith that capped the Tide’s 26-23 overtime win.

Oddsmakers don’t expect a blowout this time around: Georgia was quickly established as a 2-1/2 point favorite over Alabama by FanDuel Sportsbook, that line being set before the Bulldogs-Michigan game had even gone final.

And it makes tons of sense that these are the last two teams standing.

The Tide and the Bullodgs spent six weeks ranked No. 1 and No. 2, in some order, in the AP Top 25 this season. Big things were expected of both teams from the outset: Alabama started No. 1, Georgia began at No. 5.

But even though Alabama coach Nick Saban is 25-1 against his former assistant coaches — including 4-0 against Georgia coach Kirby Smart, who spent 11 years with him in Tuscaloosa — history says a rematch for the national title is a great sign for the Bulldogs.

In the 2011 season, LSU beat Alabama in the regular season. Alabama won the rematch for the Bowl Championship Series national title.

In 1996, Florida State topped Florida in the regular season. The Gators rolled past the Seminoles for the national title in what was then called the Bowl Alliance.

Now, it’s Georgia with a shot at turning the tide.

All it has to do is beat the Tide.