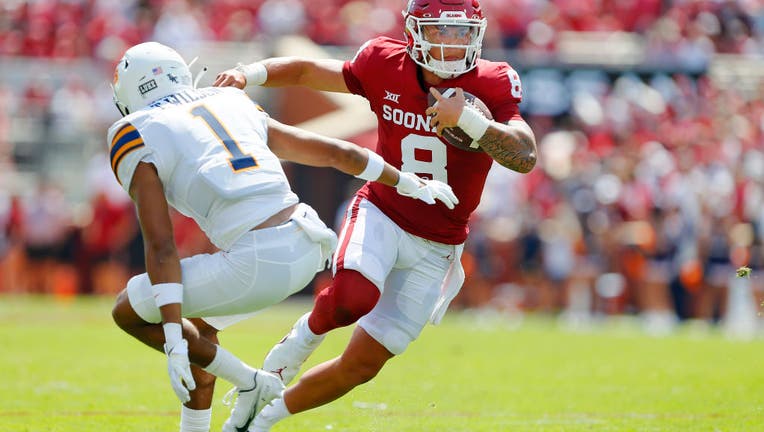 NORMAN, OK - SEPTEMBER 3: Quarterback Dillon Gabriel #8 of the Oklahoma Sooners cuts back past safety Tyson Wilson #1 of the UTEP Miners to score a 12-yard touchdown in the first quarter at Gaylord Family Oklahoma Memorial Stadium on September 3, 202

NORMAN, Okla. (AP) - Dillon Gabriel passed for two touchdowns and ran for another and No. 9 Oklahoma rolled past UTEP 45-13 on Saturday for Brent Venables' first career victory as a head coach.

Venables was a full-time assistant for the previous 26 years in stints at Kansas State, Oklahoma and Clemson. He took over after Lincoln Riley left to take the Southern California job last December.

Gabriel, a transfer from Central Florida, connected on 15 of 23 passes for 233 yards. Eric Gray rushed for 102 yards, Brayden Willis caught two touchdown passes and Marcus Major rushed for two scores for the Sooners.

Oklahoma gained 301 yards in the first half to take a 28-10 lead. Gabriel passed for 164 yards and two touchdowns before the break. Reggie Grimes led the Oklahoma defense with 2 1/2 sacks in the first half, including one on the final play of the second quarter to snuff out a scoring threat.

Oklahoma then held UTEP to 99 yards and three points in the second half.

UTEP: The Miners couldn't get anything going. They had just 28 yards rushing on 31 attempts, and the Sooners finished with six sacks and 10 quarterback hurries.

Oklahoma: The Sooners rushed for 259 yards and passed for 233. Oklahoma averaged 8.1 yards per play and 6.8 yards per carry and did not commit a turnover. The Sooners were balanced offensively and protected Gabriel relatively well.