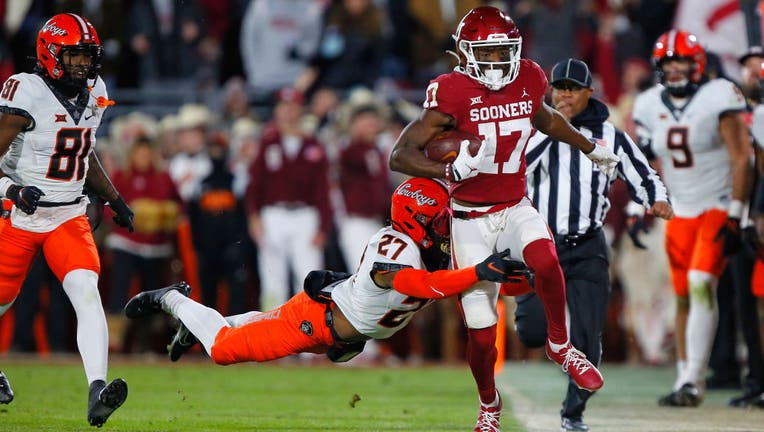 NORMAN, OK - NOVEMBER 19: Wide receiver Marvin Mims Jr. #17 of the Oklahoma Sooners returns a kickoff for 38 yards off a lateral pass from Billy Bowman before being driven out of bounds by safety Raymond Gay II #27 of the Oklahoma State Cowboys in th

NORMAN, Okla. (AP) - Oklahoma wasn't in its usual position of contending for the Big 12 title and a spot in the College Football Playoff.

But the Sooners still won Bedlam.

Dillon Gabriel passed for two touchdowns and ran for another and Oklahoma knocked off No. 24 Oklahoma State 28-13 on Saturday night.

The matchup could be one of the last in the rivalry with both teams as Big 12 members. Oklahoma is slated to leave for the Southeastern Conference in the next few years.

"Who knows how many more times, if at all, we’ll play," Oklahoma coach Brent Venables said. "I haven’t seen the schedules for next year yet and, you know, new teams coming in (joining the Big 12). So having that trophy right now means a lot to these players."

Gabriel passed for 259 yards and ran for 30. Eric Gray rushed for 90 yards and a touchdown and Drake Stoops had a career-high six catches for 89 yards for the Sooners (6-5, 3-5 Big 12), who jumped out to a 28-0 first-quarter lead and held on to become bowl eligible.

"We forced turnovers and our guys really came out ready to play, and they were incredibly motivated," Venables said.

Venables got the Sooners back on track in the series. Oklahoma had won six straight against Oklahoma State before the Cowboys won last year's game.

Spencer Sanders passed for 381 yards and a touchdown for Oklahoma State, but he threw four interceptions.

"We just didn’t protect him very well and put him on the run a lot," Oklahoma State coach Mike Gundy said. "And I think he hurried a few throws."

Brennan Presley had nine catches for 118 yards and Braydon Johnson had a career-high seven receptions for 109 yards for the Cowboys (7-4, 4-4, No. 22 CFP), who now are eliminated from contention for a spot in the Big 12 title game after reaching it last year.

The Sooners gained 299 yards in the first quarter, the second-most yards Oklahoma has ever gained in a quarter. The Sooners led 28-3 at halftime.

Trailing 28-13, Oklahoma State drove to the Oklahoma 16 before DaShaun White intercepted Sanders in the end zone with about six minutes remaining.

Oklahoma State: Sanders made the kinds of mistakes he had seemingly left behind. Oklahoma State outgained Oklahoma 484 yards to 434, but the poor start and miscues doomed what otherwise was a solid effort.

Oklahoma: The Sooners showed their enormous potential in the first quarter, but they also showed why they are barely above .500 with a very inefficient final three quarters. The Sooners only had the ball for 22 minutes and were unable to run the clock down effectively after getting their big lead.

Oklahoma State’s Jason Taylor II was all over the field. He had an interception and a fumble recovery and led the Cowboys with 11 total tackles, including 10 solo stops. He also had a pass breakup.

Stoops participated in Senior Night activities with his father, former Oklahoma coach Bob Stoops, on the field. He then had one of the best games of his career. In addition to his career high reception total, his 89 yards were the second-most of his career. He also had a 23-yard touchdown catch.