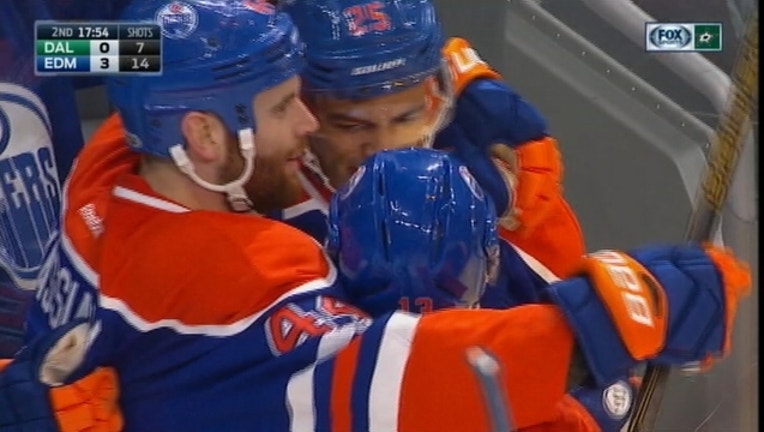 EDMONTON, Alberta (AP) - Connor McDavid and the Edmonton Oilers broke out of their skid in a big way.

Patrick Maroon had a goal and an assist and the Oilers snapped a three-game skid with a 7-1 victory over the Dallas Stars on Tuesday night.

It was a timely win too as Edmonton has seven of its next 12 games against the San Jose Sharks, Anaheim Ducks and Los Angeles Kings, all of whom are competing with the Oilers for a postseason berth.

"I look at it like this: You've got to peak at the right time," Maroon said. "We lose three in a row, now hopefully we go upward from here.

"We peak at the right time, going into big conference games against San Jose, Anaheim and L.A. These are the times we need those wins."

Benoit Pouliot, Oscar Klefbom, Darnell Nurse, David Desharnais, Ryan Nugent-Hopkins and McDavid also scored for the Oilers, who are 2-2-1 through five games of an eight-game homestand.

McDavid is tied with Blackhawks star Patrick Kane with 76 points for tops in the NHL.

Brett Ritchie scored for the Stars, who have lost three straight and allowed 17 goals in their past three games.

"That might be the worst game I have coached as a Dallas Star," Lindy Ruff said.

"We need a lot more from the leaders of our team. They are the guys who can make the difference at this time. We have had some tough breaks, but they are the guys the responsibility lies on.

"As soon as the third one went in, our team went dead."

Zack Kassian passed to Pouliot in the slot and he beat Dallas goalie Antti Niemi up high for a 1-0 lead. It was Pouliot's first goal in 28 games and sixth of the season.

"It's been a while, and hopefully I get something going with it," Pouliot said. "It's a big win for us, to win 7-1 like that, it's nice for everyone and we just want to keep it going."

Klefbom's booming point shot on the power play beat a screened Niemi to make it 2-0. The Oilers had 13 first-period shots to the Stars' five on Edmonton starter Cam Talbot.

Nurse scored his fourth of the season on a wrist shot from the top of the circle as another Oilers defender got in on the scoring two minutes into the second period.

Ritchie beat Talbot stick-side to get the Stars back into the game six minutes into the second.

Edmonton made it 4-1 midway through the second as Desharnais batted home a rebound off the boards for his second in five games as an Oiler.

Niemi was chased from the Dallas net less than two minutes later as Maroon scored his 22nd of the season. Kari Lehtonen came in to replace him in goal.

Edmonton kept on coming in the third period, getting goals from Nugent-Hopkins (14th) and McDavid (24th) 1:43 apart to make it 7-1.

Niemi stopped 15 of 20 shots and Lehtonen turned aside 7 of 9 shots.

It was the first time since the 2008-2009 season that the Oilers have scored seven or more goals on at least three occasions.

NOTES: It was the third and final meeting of the season between the teams. Dallas won the first matchup 3-2. Edmonton took the second game 5-2. ... Stars winger Remi Elie, who got his first NHL goal in San Jose on Sunday, played on Dallas' top line. Elie was a linemate of Oilers captain Connor McDavid in Erie of the Ontario Hockey League. ... Forward Anton Slepyshev returned to the Edmonton lineup after being a healthy scratch for the past four games.

Stars: Travel to Vancouver to face the Canucks on Thursday night.