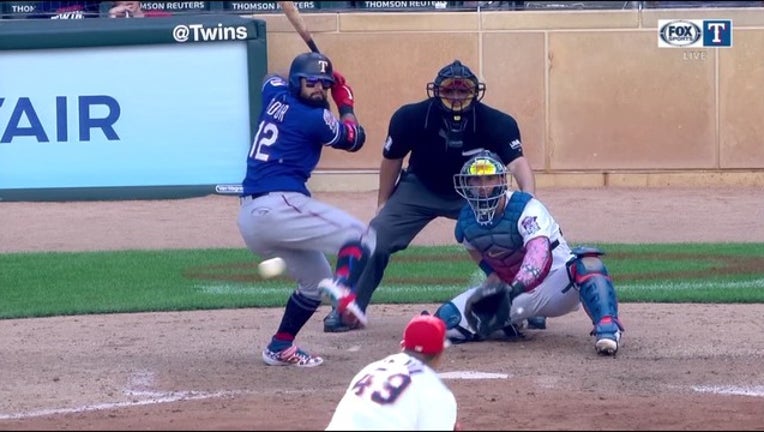 MINNEAPOLIS (AP) - The Texas Rangers were going to count on their bullpen Sunday after deciding to give All-Star pitcher Mike Minor extra rest heading into the break.

The relievers handled the job, even with added duty tacked on in the form of extra innings.

Rougned Odor's three-run homer in the 11th inning gave Texas a 4-1 win against the Minnesota Twins on Sunday and four relievers combined for 9 1/3 scoreless innings against the majors' top offense.

"It was as close to a playoff setting as you can get," Rangers manager Chris Woodward said. "No tomorrow basically. We have three days off, so everybody that we had available, basically."

Shawn Kelley (4-2) pitched two innings for Texas, which had lost six of its previous seven games and three straight series. The Rangers decided to skip Minor's turn on Sunday and the left-hander won't pitch in the All-Star Game.

"I think our pitchers fed into our offense a little bit with what they did against that offense, holding them scoreless basically for the last 10," Woodward said. "That was really big and allowed us to win the game."

In the 10th, the Twins stranded runners on second and third base when Mitch Garver fouled out to first base.

"We've done this several times already this year where we just play these long games," Minnesota manager Rocco Baldelli said. "For all the runs that have been scored this year, we've played a number of games that were kind of way on the other end of the spectrum. ... A couple of runs would have gotten it done tonight, but it wasn't meant to be."

Danny Santana had four hits for Texas. Shin-Soo Choo reached base four times before he was pinch-run for in the eighth with left ankle soreness. Choo was injured going back into first base on a pickoff attempt.

The Twins had a chance to break through earlier with runners on second and third with no outs in the fourth. But Miguel Sanó was thrown out at home trying to score on Byron Buxton's grounder to third. Buxton stole second base, but was thrown out at third by Gallo after Max Kepler's flyout.

"It helped us get to extra innings, saving that run, so it was pretty important," Gallo said. "I didn't think I had a chance, but give credit to (Cabrera) for picking that ball and keeping the tag on him. That was incredible."

The game was supposed to be a matchup of All-Star starters. Minor was skipped and Minnesota's Jake Odorizzi was placed on the injured list earlier in the week with a blister.

The Twins went with starter Kyle Gibson on short rest. Gibson pitched an inning because he was scheduled to have a long break between starts.

Left-hander Devin Smeltzer was recalled to be the long reliever on Sunday. He pitched 4 1/3 innings and gave up one run and five hits and a walk as one of six relievers. He was optioned back to Triple-A after the game.

Joe Palumbo was recalled by the Rangers to add more possible innings to the bullpen. He pitched three scoreless innings before being optioned back to Triple-A Nashville.

To start the eighth inning, home plate umpire Gerry Davis was replaced by Brian Knight. Davis umpired the seventh inning with a towel around his neck on a warm day in Minnesota.

The official temperature at the start was 81 degrees with very few clouds and little breeze. The final two innings were played with three umpires as Davis didn't return following the switch.

Twins: Jake Cave pinch-ran for Kepler in the 10th inning. Kepler led off with a single to right and was checked on by the team's athletic trainer but stayed in. After he reached second, Kepler was removed from the game and Baldelli said he's been playing through a knee injury.

Rangers: Texas returns from the break with a four-game home series against Houston. The Rangers haven't announced their rotation coming out of the break, but RHP Lance Lynn (11-4, 3.91 ERA) will likely start the first game of the series on Thursday.

Twins: Following the All-Star Game in Cleveland, Minnesota will have a three-game road series against their division rivals, the Indians, starting Friday. Baldelli wasn't ready to announce his rotation coming out of the break.