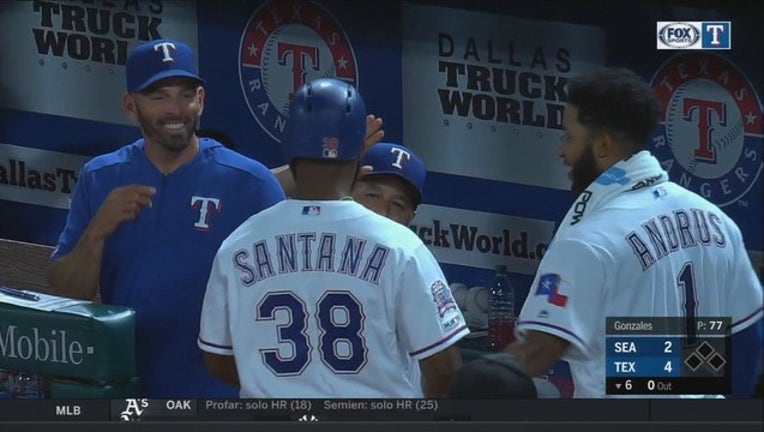 Lefty Kolby Allard (3-0) worked 5 2/3 innings in his fifth start for Texas, which came exactly a month after he was acquired from Atlanta in a trade. The 22-year-old rookie allowed two runs while striking out four and walking one.

Nick Solak led off the Texas second with a double that extended his franchise-record streak by reaching base in his 11th consecutive game to start his big league career. He scored to make it 1-1 when Odor lined a double to deep center, ending a hitless drought that got into its 10th game since a hit Aug. 20.

The Rangers went ahead to stay against Marco Gonzales (14-11) with an unearned run in the fifth that made it 3-2. They added three more in the sixth when Santana led off with a towering flyball that barely skimmed over the eight-fall wall in right field, and No. 9 batter Jose Trevino's third hit of the game was a two-run double.

Gonzales allowed six runs in his 5 2/3 innings. He struck out two and walked two.

Hard-throwing rookie Emmanuel Clase, the fourth Texas pitcher, worked the ninth for his first career save.

Mallex Smith had a hand in all of Seattle's runs, scoring twice and driving in one.

Smith led off the game with a single, stole third base after J.P. Crawford walked and scored on Austin Nola's double play grounder. Allard allowed the first two batters to reach, but then retired 12 consecutive batters (13 outs) before three one-out singles loaded the bases in the fifth. Smith's two-out infield RBI single tied the game at 2.

An errant throw that went out of play allowed Smith to trot home after his triple to left in the seventh.

Rookie lefty Brock Burke (0-1, 0.75 ERA) is the first pitcher in Rangers history to allow one or no runs in each of his first two MLB outings. Seattle plans to use an opener before lefty Tommy Milone (3-8, 5.08), who is set to follow an opener for the 13th time this season.