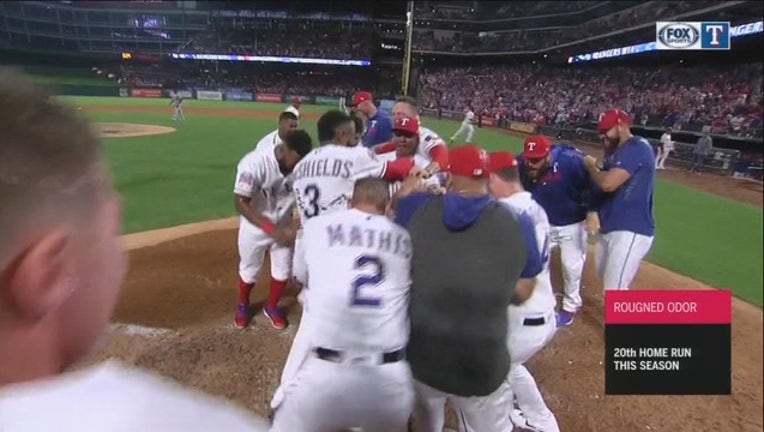 ARLINGTON, Texas (AP) - Rougned Odor somehow managed to check his swing to get to a full count. The Texas Rangers second baseman, who has been climbing out of a season-long slump, ended the game on the next pitch.

Odor hit an opposite-field homer with two outs in the 10th inning Saturday night, depositing a ball into the visitors bullpen in left-center, to give the Rangers a 5-4 victory over the Detroit Tigers and their first series victory in more than a month.

The game-ending homer off Nick Ramirez (5-4) came a pitch after third base umpire Dave Rackley ruled Odor was able to check his swing on 2-2 pitch.

"I was upset when it happened. You can tell when you see a full barrel," said Ramirez, who had watched replays.

"I think we all know what we saw when he swung at the ball. The bat's all the way out in front of home plate," manager Ron Gardenhire said. "The home plate umpire didn't call it, and he checked, and obviously it's a missed call. Plain as day. ... It's ridiculous."

"The reason why we stuck with Rougie so long, through so much adversity, was that. He brings that every day," manager Chris Woodward said. "That's the thing I admire most about him, the character of just showing up competing."

Jose Leclerc (2-3), a night after his first save since April 17, pitched a perfect 10th inning.

The Rangers have won the first two games of this three-game set for their first series win since a three-game sweep at Detroit in late June. Texas had since gone 0-6-3 for its longest span of winless series since 10 in a row in 2003.

Miguel Cabrera's 472nd career homer was a towering two-run shot to center in the first that put the Tigers up 2-0. After Willie Calhoun's leadoff homer in the Rangers fourth tied the game, Detroit went ahead 4-2 on Harold Castro's two-out single in the fifth.

Tigers lefty Matthew Boyd struck out nine and walked one over 5 2/3 innings in his first start since the trade deadline passed three days earlier with him still in Detroit, despite speculation otherwise before that. Boyd, who has only one win his last 11 starts, exited with a 4-2 lead.

The Rangers tied the game at 4 with two unearned runs in the seventh. Jose Trevino started the inning reaching on a two-base error when rookie right fielder Travis Demeritte misplayed a flyball. He scored on a double by Delino DeShields, who raced home and scored on a head-first slide on a sac fly by Elvis Andrus.

Trevino, the prospect catcher playing his first big league game since hitting a game-ending, two-run single on Father's Day 2018, had an RBI single in the third after Isiah Kiner-Falefa doubled.

Third baseman Asdrubal Cabrera and catcher Tim Federowicz were both designated for assignment by the Rangers on Thursday. Trevino and Kiner-Falefa, now primarily playing third base instead of catch, were then recalled.

Miguel Cabrera took over 26th place alone on the career RBI list, breaking his tie with Gary Sheffield. Cabrera has 1,678 career RBIs, 17 shy of Cal Ripken Jr. for 25th. On the career homer list, Cabrera is one short of matching Carlos Delgado for 33rd place.

Demeritte drew two walks for his second game in a row since being acquired in a trade from Atlanta. He is the first Tigers player since 1908 to draw two walks in each of his first two big league games.

Tigers: SS Jordy Mercer left the game because of lower body cramps. Gordon Beckman replaced him as a pinch-hitter in the eighth, and then played second base. With a runner at second in the ninth, Beckham made a diving inning-ending catch on a liner by Elvis Andrus.

Jordan Zimmermann (1-8, 7.23 ERA), whose lone victory came in his last start for Detroit, is on the mound for the series finale. Rookie right-hander Pedro Payano (1-0) goes for the Rangers.