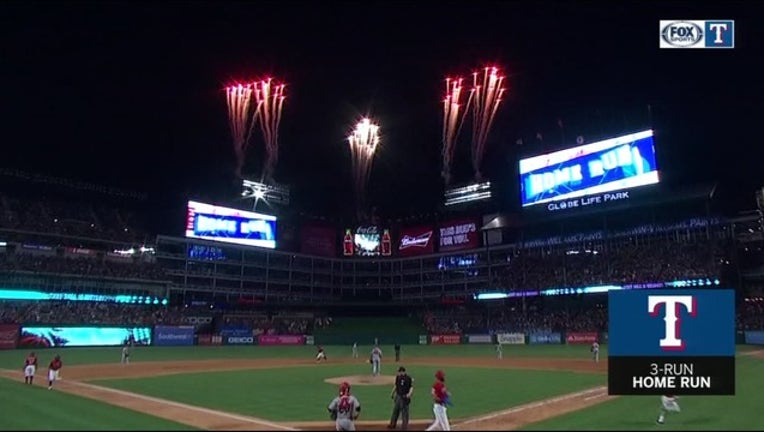 ARLINGTON, Texas (AP) - Lance Lynn matched the major league lead with his 11th win and the Texas Rangers avoided a series sweep with a 9-3 victory over the grieving Los Angeles Angels on Thursday night, the Fourth of July game that the late Tyler Skaggs had been scheduled to start.

The Angels won the first two games of the series after the 27-year-old Skaggs was found dead in his hotel room in Texas on Monday, and that night's scheduled game was postponed until August.

Mike Trout hit another impressive homer for Los Angeles in the first inning, his AL best-tying 25th. But Lynn (11-4) limited Los Angeles to only one more run over his seven innings and Rougned Odor homered twice to drive in five runs for the Rangers, who snapped a four-game losing streak.

An emotional trip for the Angels that began with them traveling to Texas in cowboy hats and Western attire - a theme initiated by Skaggs - now takes them to Houston for three games this weekend against the Astros before the All-Star break.

Skaggs' No. 45 jersey hung prominently in his clubhouse locker before the game, and then in the dugout during games throughout the series.

The Rangers went ahead to stay on Nomar Mazara's two-run double in the third that made it 3-2. Mazara finished with four hits.

Odor added a two-run homer in the fourth, snapping his streak of four consecutive strikeouts and seven Ks in his previous eight at-bats. His three-run shot to center in the seventh was estimated at 471 feet.

Trout's homer was his third in two games, and ninth this year against Texas to match an Angels record for the most against another team in the same season. The estimated 445-foot laser ricocheted off the glass facade of a club beyond the first deck of seats in left field.

Vladimir Guerrero had nine homers for the Angels against Seattle in 2001, and Tim Salmon hit nine against Cleveland in 1998.

The Angels still play their AL West rival six more times this season. That includes a doubleheader when they return to Texas for another series Aug. 19-21, though it hasn't been announced on which of those days there will be two games.

Angels second baseman Tommy La Stella will go to next week's All-Star Game in Cleveland on crutches and in a cast. The first-time All-Star is out 8-10 weeks after he broke his right tibia when he fouled a 97-mph fastball off his lower leg on Tuesday. Manager Brad Ausmus, a one-time All-Star as a player, helped convince La Stella that "he deserved it, he earned it" even though he can't play. "I think he'd regret it if he didn't go experience," Ausmus said.

Angels: OF Justin Upton didn't play after leaving Wednesday night's game with left quad tightness. ... INF Zack Cozart, out since May 27, saw Rangers team physician Dr. Keith Meister for a second opinion on his left shoulder. Cozart will get a new MRI in California on Friday. He played only 58 games in 2018 before surgery on a torn labrum. ... 1B Albert Pujols, who fouled a ball of his ankle Tuesday night, was out of the lineup for the second game in a row, but Ausmus said that wasn't health-related.

Angels: The Angels face another 10-game winner (Justin Verlander) in the opener of a three-game series at Houston.

Rangers: RHP Adrian Sampson, 6-2 in his last nine games, starts the opener of a weekend series at Minnesota on Friday night.