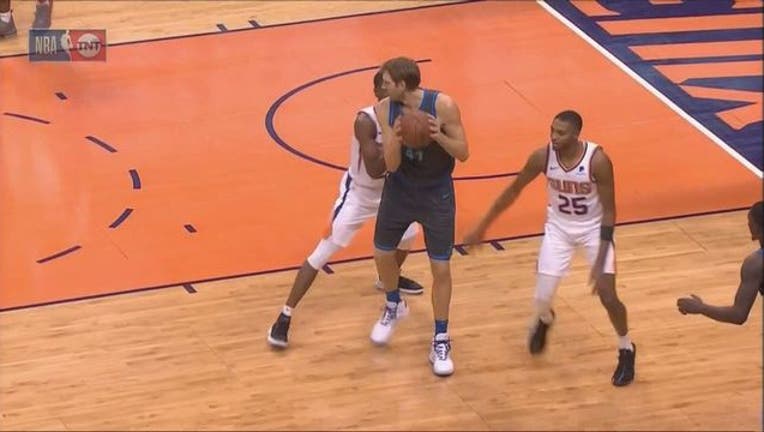 The Dallas loss came in the season debut of Dirk Nowitzki, who hadn't played yet while recovering from ankle surgery. When he entered the game late in the first quarter, it marked his 21st season with the Mavericks, most by a player with one team in NBA history.

Phoenix beat the Mavericks for the seventh straight time. The Suns have just five wins this season and two have come against Dallas.

The Mavericks were beaten in the season opener 121-100, also in Phoenix. Both games were late tips on national television.

Harrison Barnes scored 15 but on only 6-of-15 shooting for the Mavericks. DeAndre Jordan added 14 points and 15 rebounds.

Dallas never led after the first quarter. Phoenix was up by 10 at halftime and as many as 15 in the third quarter.

The Mavericks tied it twice early in the second period before a 9-2 spurt put Phoenix up 36-28 on Jackson's fast-break dunk. Another dunk on the break, this one by Warren, gave the Suns their biggest lead of the half at 47-36 with 1:14 left. Dallas scored the next four points before Mikal Bridges banked in a 3-pointer from 35 feet at the buzzer to put the Suns up 50-40 at the break.

The Mavericks cut it to 56-53 early in the third but Phoenix got two 3-pointers from Ariza and one from Jackson in a 12-4 run to lead 68-57 on Crawford's driving layup. The Suns twice stretched the lead to 15 late in the quarter, the last time 78-63 after Warren's driving reverse layup with 53 seconds left. Phoenix led 78-67 entering the fourth.

Barnes' basket cut the lead to 90-83 with 3:43 remaining but the Suns scrambled for a loose ball and Jackson sank a 3-pointer to make it 93-83. Barnes lost the ball to Ariza for a turnover, Crawford made a 19-footer and the Suns coasted from there.

Mavericks: Backup point guard J.J. Barea missed the game with a sprained left ankle. ... Dallas was 2 of 19 on 3-pointers in the first half. Barnes was 0 for 6. ... Mavs were playing for the second consecutive night, beating Atlanta 114-107 in Dallas on Wednesday.