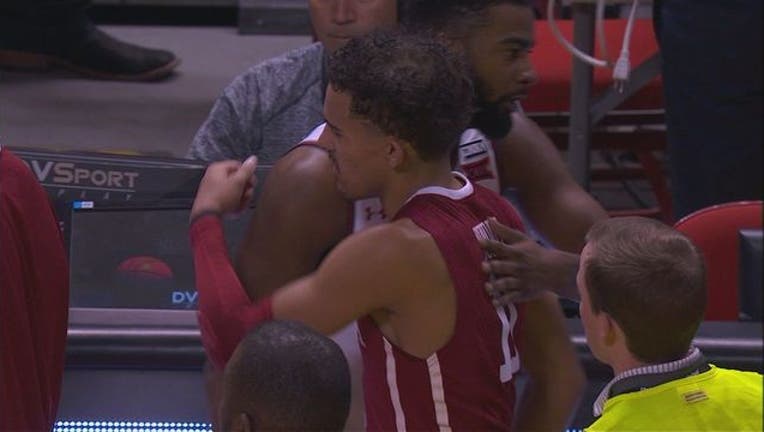 Young, the son of former Texas Tech player Rayford Young, missed all nine 3-pointers while finishing with 19 points in front of a hostile Lubbock crowd that booed him just about every time he touched the ball in the Sooners' fourth straight loss.

The Red Raiders (22-4, 10-3 Big 12) won their seventh straight game, including a six-game Big 12 run that's the best in the conference this season. They tied the Sooners for the most Top 25 wins nationally this season at six.

Evans went 4 of 7 from 3-point range, including a fadeaway shot from the left corner that put Texas Tech ahead 79-71 with less than 2 minutes to go. He added his second dunk of the second half moments later between a pair of 3s that kept the Sooners (16-9, 6-7) alive into the final minute.

And Evans easily outscored Young in matchup of the Big 12's top two scorers -- a game that lacked drama late despite 17 ties and 11 lead changes.

The crowd was ready for what will be Young's only appearance in Lubbock if the freshman declares for the NBA draft this summer, as expected. One fan greeted him with a sign picturing Young as a child wearing a Texas Tech T-shirt and showing the school's "guns up" sign.

Besides going without a 3 for the first time this season, Young gave the crowd a final moment to jeer when he dribbled the ball off his foot for his sixth turnover with the Sooners trailing by six with 41 seconds remaining. He was 4 of 15 from the field but made all 11 free throws.

Young, who went to high school not far from the OU campus in Norman, and his dad are the first father-son pair in the 22-year history of Big 12 basketball.

OU junior Christian James had a career high for the second straight game with 23 points in the third game that someone other than Young led the Sooners in scoring.

Oklahoma: Young's in a bit of a 3-point slump, which will have to stop if the Sooners are to make a run in the NCAA Tournament. He 1 of 17 over the past two games and had a recent 2-of-14 showing in a loss to Texas that started the current losing streak.

Texas Tech: The Red Raiders had their most 3s in a Big 12 game, finishing 11 of 21. Like a lot of their scoring, they did it with Evans leading the way and balance behind him. Freshman Zhaire Smith and Stevenson each made both their attempts and Tommy Hamilton IV was 2 of 4.

Texas Tech: At Baylor on Saturday.