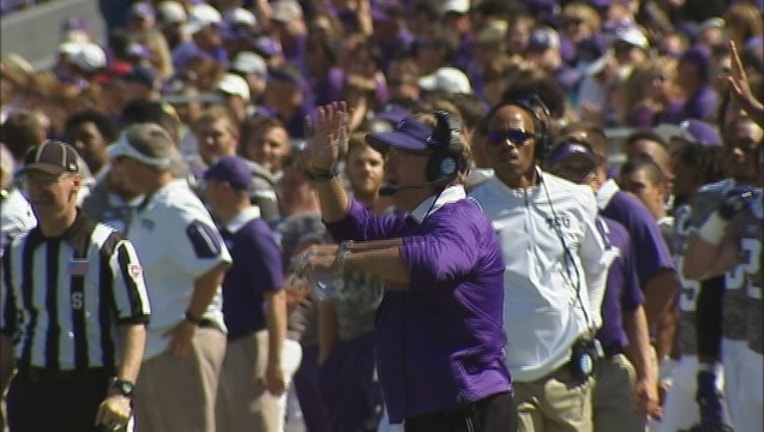 FORT WORTH, Texas (AP) — TCU coach Gary Patterson never spent much time lamenting injuries on his defense or all the young players on that side of the ball.

"We weren't supposed to be very good on defense this year anyway, and we were supposed to win everything with offense," Patterson said. "These kids have kind of taken it as a challenge."

The defense is holding its own for the third-ranked Horned Frogs (2-0), who have already used nine first-time starters on that side of the ball. There are also freshmen starting at both linebacker spots in Patterson's 4-2-5 scheme.

"We've got some young guys, we've got to see how fast we can grow them up," said Patterson, who still runs the TCU defense like he did as coordinator before becoming head coach 15 years ago. "We told them at the beginning that you never know when you're a couple of plays away from going from being a third-team guy to a first-team guy. I think they're all starting to believe it now."

The Frogs, still with an explosive offense led by quarterback Trevone Boykin and a load of returning starters, are one of only three teams ranked in the top 20 nationally in both total offense and total defense. They are 17th in both categories.

Patterson said there is a "great chance" of Pierson getting back on the field Saturday night against SMU after missing the first two games with an undisclosed injury. His 31 career starts match Boykin for the most on the team.

But the Frogs have apparently lost senior safety Kenny Iloka for the season after he injured his knee last week. Defensive end Mike Tuana is also questionable.

TCU went into this season as the only team in the country without any linebackers who had started a college game — the only other team fewer than five was Virginia with one. And the Frogs are already without the two who started the opening game.

Redshirt Ty Summers and true freshman Montrel Wilson took over as the starting linebackers in a 70-7 win over FCS team Stephen F. Austin last Saturday. Summers is a former dual-threat prep quarterback who suffered a season-ending injury in the 2014 opener. Wilson had a team high-matching nine tackles against the Lumberjacks.

TCU has allowed 12 points and 254 yards per game. The Frogs have the nation's longest streak by forcing a turnover in 27 consecutive games.

"Every week has to be a learning experience," Patterson said. "We've can't just be getting ready for the team we're playing, but we also have to keep preparing for the season."