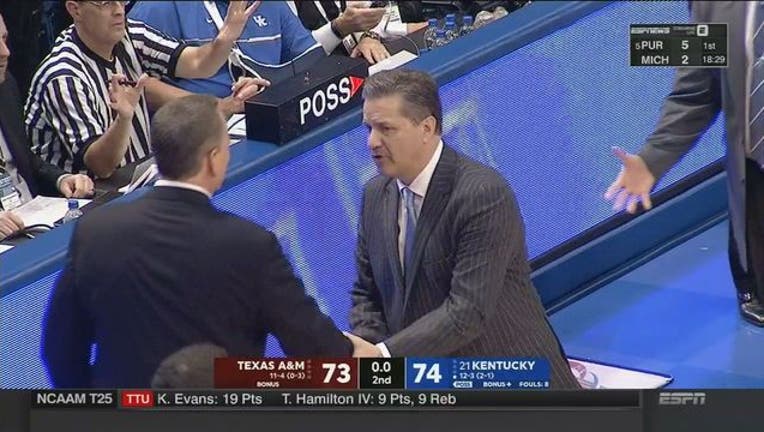 LEXINGTON, Ky. (AP) - PJ Washington made a steal that led to Kevin Knox's go-ahead layup with 2:28 left, then added four points down the stretch to help No. 21 Kentucky rally past Texas A&M 74-73 on Tuesday night.

Trailing 59-53 with 8:43 remaining, the Wildcats clawed back to tie the game three times before Washington stole a high pass and fed Knox for a 69-67 lead. Washington added a layup between two free throws for a 73-69 edge.

The Aggies weren't done, taking advantage of missed Kentucky free throws to get within a point with four seconds left on Robert Williams' tip-in. Two Washington misses at the line set up a final chance for Texas A&M, but a long pass sailed out of bounds as time expired.

Hamidou Diallo had 18 points, Washington and Shai Gilgeous-Alexander had 16 each and Knox got 15 as Kentucky (13-3, 3-1 Southeastern Conference) bounced back from last weekend's loss at No. 24 Tennessee. Gilgeous-Alexander also had seven rebounds and five assists starting in place of Quade Green, who was ruled out just before tipoff because of a back strain.

Texas A&M: Getting Williams (12 points, eight rebounds) and Gilder back in the lineup after illness and injury respectively was big for the Aggies, especially in the second half. But they faltered down the stretch to remain the SEC's lone winless squad.

Kentucky: Green's absence left the Wildcats with just Gilgeous-Alexander and Diallo among its regular guards. Gilgeous-Alexander effectively filled the void in his third start, making the game's first basket and then some while pushing the quick tempo needed against the athletic Aggies.