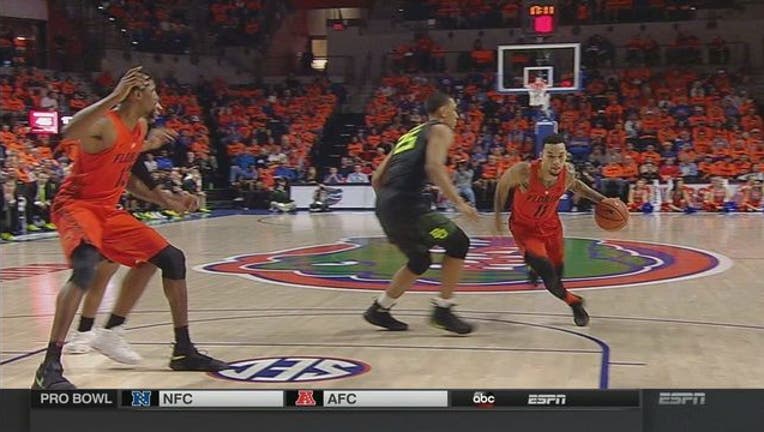 GAINESVILLE, Fla. (AP) - After Chris Chiozza hit his first 3-pointer of the game, he figured he would take another.

When that one went in, his confidence really started to soar.

"Once I hit two, I said, 'I'm just going to come down and shoot another one to see what happens,'" he said. "They went in, so I was like, 'All right, I might shoot some more.'"

No one on Florida's bench would have complained had he taken every shot the rest of the day.

Chiozza scored 20 points, including 13 straight late in the first half, and the 20th-ranked Gators used a barrage of 3-pointers to beat Baylor 81-60 in the Big 12/SEC Challenge on Saturday.

Jalen Hudson added 17 points for Florida (15-6), which bounced back from a midweek loss to South Carolina to win for the ninth time in its last 11 games.

The Gators lost that one at the 3-point line. Coach Mike White's team handled the Bears (12-9) thanks mostly to a red-hot shooting performance from behind the arc.

Chiozza and Hudson led the way. Chiozza hit 4 of 7 from 3-point range, including consecutive treys during his 13-point spurt over a five-minute span in the opening 20 minutes. Hudson made 4 of 6 from behind the arc.

"We tried to take away his passing and he gets you with his scoring," Baylor coach Scott Drew said. "That's where great players can do more than one thing and hurt you more than one way. He's one of the best point guards in the county, and everybody would agree with that. But when he's scoring on top of his facilitating, then he goes to another level."

Chiozza scored in double figures for the 11th time in the last 15 games. He also held Baylor's leading scorer, Manu Lecomte, to 10 points in 29 minutes.

"Chris Chiozza was amazing today," White said. "I can't imagine he's had a better game than that. I'm hoping he can play that way again, but that'd be asking a lot. He literally chased (Lecomte) for 29 minutes, and he is a handful as we all know. ...

"He put on a show today. He was terrific. I hope he doesn't read this."

The Gators finished 14 of 25 from behind the arc, including Egor Koulechov's banked-in trey in the first minute of the game. Koulechov finished with 16 points and eight rebounds.

KeVaughn Allen, who chipped in 10 points, drained a 3-pointer right before the halftime buzzer. Hudson beat the shot clock with another one and later sank back-to-back 3s that pushed Florida's lead to 66-48 with about nine minutes to play.

Baylor: The Bears have lost three in a row for the first time since dropping five straight in January 2014. Baylor also has lost five of six, a huge drop-off for a team that made the Sweet 16 last year and had been ranked until earlier this month.

"Obviously losing is tough. You lose confidence, you lose momentum and you've got to break out of it," Drew said. "The doctor usually doesn't order road games to do that. We're in a tough stretch. ... We need to get back home and hopefully win a couple."

Florida: Senior center John Egbunu went through pre-game warmups for the second straight game and even dressed for the game for the first time all season, another sign of progress for the much-needed big man. He began non-contact practice last week and could be a huge help in the post when he returns.