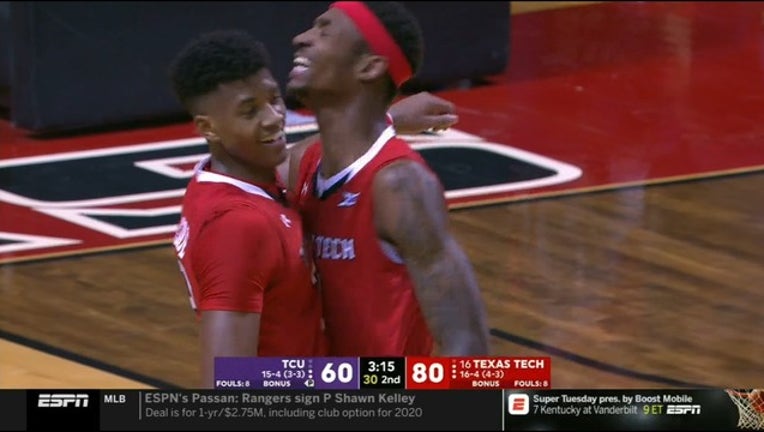 LUBBOCK, Texas (AP) - Jarrett Culver scored 12 of his 18 points after halftime, including two punctuating dunks in the closing minutes, and No. 16 Texas Tech snapped a three-game Big 12 losing streak with an 84-65 win over TCU on Monday night.

The Red Raiders (17-4, 5-3 Big 12) had their biggest lead after Tariq Owens blocked a shot that was rebounded by Davide Moretti, who worked the ball up the court before a lob pass to Culver for an emphatic slam that made it 80-60 with 3:16 left. Culver had another dunk after that.

Matt Mooney also had 18 points for Texas Tech, which lost three Big 12 games in a row before a win over Arkansas in the SEC/Big 12 Challenge on Saturday night. Owens had 17 points while Moretti finished with 11 points and seven assists.

Kouat Noi had 16 points for TCU (15-5, 3-4), while Desmond Bane scored all 13 of his points after halftime. Kendric Davis and Kevin Samuel, both freshmen, had 10 points. Samuel also had 12 rebounds for his fourth double-double.

Texas Tech started the game with Mooney's alley-oop pass to Owens for a dunk. Noi then scored six in a row before Tech's 8-0 run that put them ahead to stay - and was capped when Owens banked in a 3-pointer.

The Red Raiders had a 37-18 lead after Moretti hit consecutive 3s. After TCU cut into the gap a bit, Tech took a 43-27 hafltime lead when Moretti had a defensive rebound and Culver then drove nearly the length of the court for a buzzer-beating layup.

TCU: The Horned Frogs have won their last seven Big 12 home games, dating back to last season, but are 0-4 on the road in conference this season. The last two have been double-digit losses.

Texas Tech: An encouraging offensive performance for the Red Raiders with four players scoring in double figures while shooting 54 percent (32 of 59) overall - and 43 percent (9 of 21) on 3-pointers. They had 43 points at halftime - just two points less than they had overall a week ago in a 58-45 loss at Kansas State.

Texas Tech is on the road for three of its first four games, starting Saturday at No. 11 Kansas.