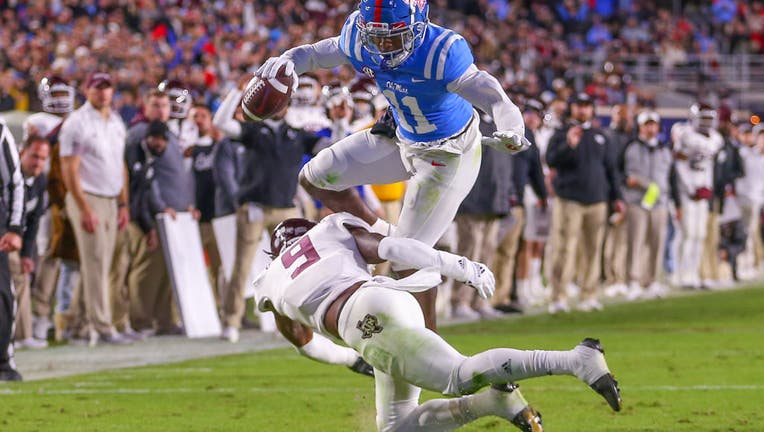 OXFORD, MS - NOVEMBER 13: Ole Miss Rebels wide receiver Dontario Drummond (11) leaps over a defender during the game between the Ole Miss Rebels and the Texas A&amp;M Aggies on November 13, 2021, at Vaught-Hemingway Stadiumin Oxford, Ms. (Photo b

OXFORD, Miss. (AP) - Mississippi beat one of the best defensive teams in the Southeastern Conference with a shut-down performance of its own.

A.J. Finley returned an interception 52 yards for a touchdown and Matt Corral threw for 247 yards and a touchdown to lead No. 12 Ole Miss to a 29-19 win over No. 11 Texas A&M on Saturday night.

"The defense just had an amazing day," Ole Miss coach Lane Kiffin said. "That came against one of the hottest teams in America. Just an unbelievable great day overall."

The Rebels (8-2, 3-3 Southeastern) held a 15-13 lead in the fourth quarter before Ashanti Cistrunk's interception set up a 13-yard touchdown run by Snoop Conner with 6:32 left.

"I just walked right into it. That’s all there was to it," Cistrunk said. "We tied up on the ball, but I knew I had it."

Finley provided an insurmountable cushion on the next series, grabbing Zach Calzada's throw and returning it down the Texas A&M sideline.

"It was a crazy moment," Finley said. "It was my first pick-six since I’ve been here, so that was really big for me."

Texas A&M (7-3, 4-3), which came in second in the SEC to Georgia in in yards per play allowed, trailed 15-0 at half, but whittled the lead to two in the fourth quarter on a 24-yard scoring run by Devon Achane and field goals by Seth Small.

Achane ran for a 9-yard touchdown to finish the scoring with 3:11 left.

Corral completed 24 of 37 passes and Caden Costa kicked field goals of 33 and 32 yards. Chance Campbell and Keidron Smith added a safety by tackling Isaiah Spiller in the end zone in the first half.

"That was a disappointing thing coming up here," A&M coach Jimbo Fisher said about the scoreless first half. "We put ourselves behind the eight ball. Give Ole Miss credit. They played a really good game."

The Rebels finished with 504 yards of total offense, highlighted by Jerrion Ealy with 24 carries for 152 yards and added 34 yards on four receptions.

Texas A&M: The loss snapped a four-game winning steak and ended the Aggies hopes of winning the SEC West.

"Our defense gave us a chance in the first half," Fisher said. "We didn’t play with the poise we have shown."

Ole Miss: A 10-win season and New Year’s Six bowl berth are within reach, and the Rebels still have slim hopes for an SEC West title. Alabama would have to lose its last two games for Ole Miss to have any chance.

The No. 12 Rebels have spent one week in the Top 10 and the impressive win could push them back into that company. The loss will drop the Aggies.

Texas A&M: The home finale is a visit from Prairie View A&M on Saturday.