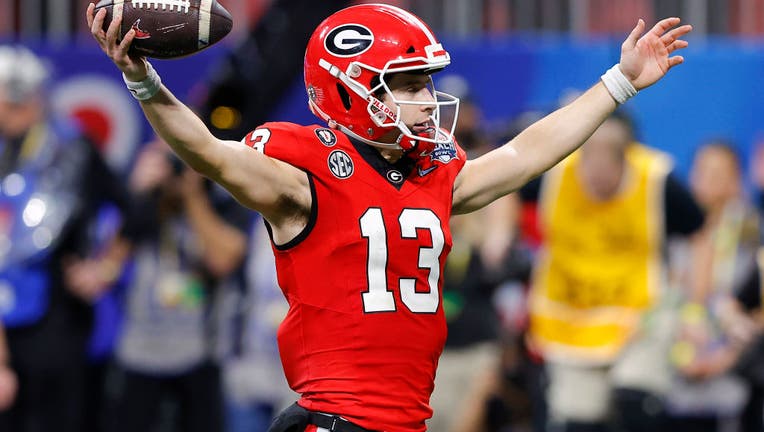 ATLANTA, GEORGIA - DECEMBER 31: Stetson Bennett #13 of the Georgia Bulldogs celebrates after running out the clock to defeat the Ohio State Buckeyes in the Chick-fil-A Peach Bowl at Mercedes-Benz Stadium on December 31, 2022 in Atlanta, Georgia. (Pho

ATLANTA - Kirby Smart will ask his Georgia players to execute better when the Bulldogs play for second straight national championship next week, but the coach knows he can't ask his players to be more resilient.

Georgia remains undefeated because the Bulldogs never gave up while rallying from two-touchdown deficits in each half for a thrilling College Football Playoff semifinal 42-41 victory over Ohio State that ended early Sunday.

Stetson Bennett capped No. 1 Georgia’s final comeback with a 10-yard, last-minute scoring pass to Adonai Mitchell for the Peach Bowl victory over No. 4 Ohio State. The win gives the Bulldogs a shot at their second straight national title.

"Our guys are extremely resilient," Smart said. "... I had no doubt our team would come out fighting."

Georgia (14-0) will play No. 3 TCU, which beat No. 2 Michigan 51-45 in the Fiesta Bowl semifinal, on Jan. 9 for the national championship. The Bulldogs, who won their first national title since 1980 last season, will play for the first back-to-back championships in school history.

"If we want any chance of winning the national championship, we’ve got to play a lot better football than we played tonight, but we’ve got to keep our resilience," Smart said.

"That probably was the most fun game I’ve ever played in my life," said Ohio State quarterback C.J. Stroud, who threw four touchdown passes. "It just sucks it comes down like that."

Ohio State (11-2) bemoaned its inability to protect the two-touchdown lead in the final quarter.

"If we’re going to win these games we can’t give up those big, explosive plays," Ohio State coach Ryan Day said.

Bennett’s 76-yard scoring pass to Arian Smith, followed by Bennett’s pass to Ladd McConkey on the 2-point play, cut it to 38-35.

Ruggles’ 48-yard field goal gave the Buckeyes a 41-35 lead, leaving only 2:36 for Bennett and Georgia’s offense.

"I looked around and there were just a bunch of determined strong stares from all the dudes," Bennett said of the huddle before the drive. "It gave me confidence."

Bennett’s go-ahead scoring pass to Mitchell with 54 seconds remaining, Stroud led the Buckeyes back with a 27-yard run to the Georgia 31. The missed field goal set off the Georgia celebration that left Bennett in tears.

"That was a good game," Bennett said. "These stats are pretty much dead even across the board. Yeah, that one was special."

Ohio State shut out Georgia in the third quarter while the Buckeyes pulled away with 10 points.

Bennett, who joined Stroud as one of four Heisman Trophy finalists, finished the game strong, completing 23 of 34 passes for 398 yards with three touchdowns and one interception. He had a 3-yard scoring run.

Stroud’s second scoring pass, a 16-yarder to Harrison, gave the Buckeyes a 21-7 lead. Stroud escaped pressure on the play before passing to a diving Harrison in the end zone.

Georgia scored the next 17 points for a 24-21 lead. The Bulldogs had scoring runs of 11 yards by Kendall Milton and 3 yards by Bennett during the run.

Stroud completed 23 of 34 passes for 348 yards without an interception.

Stroud capped the Buckeyes’ first possession of the second half with a 10-yard scoring pass to Emeka Egbuka for a 35-24 lead — already the most points allowed in a full game by the Bulldogs this season.

Protecting a 38-27 lead, Ohio State called for a fake punt on fourth-and-1 in the fourth quarter. But before a direct snap to Mitch Rossi produced the apparent yardage for the first down, Smart already had called timeout.

The timeout may have saved Georgia's comeback hopes. The Buckeyes then had to punt, and on Georgia's next play Bennett threw the 76-yard scoring pass to Smith.

"They were not in their traditional formation," Smart said, explaining his decision to call the timeout. "One of those gut reactions that I didn’t think we had it lined up properly to stop it, so I called timeout."

Georgia: The Bulldogs ran for 135 yards and finished with 533 total yards, winning with offense on a night its proud defense couldn’t stop Stroud.

Ohio State TE Cade Stover, suffering back spasms, was taken to a hospital for precautionary reasons, the team announced at the start of the second half. There was no immediate update.

Day said Harrison was placed in concussion protocol following a big hit in the end zone from Georgia’s Javon Bullard, who initially was called for targeting. Following a review, officials removed the targeting call.

Georgia OLB Chaz Chambliss left the game late in the first half with an apparent left knee injury. Chambliss needed help leaving the field. Georgia TE Darnell Washington was on crutches on the sideline after suffering a left ankle injury in the second period.

Georgia WR Ladd McConkey (knee) had limited playing time and RT Warren McClendon (knee) was in uniform but did not start.

Buckeyes running back Miyan Williams, who missed practice this week with a stomach bug while also still recovering from an ankle injury, had only three carries for eight yards, including a scoring plunge from the 2, in the first half.