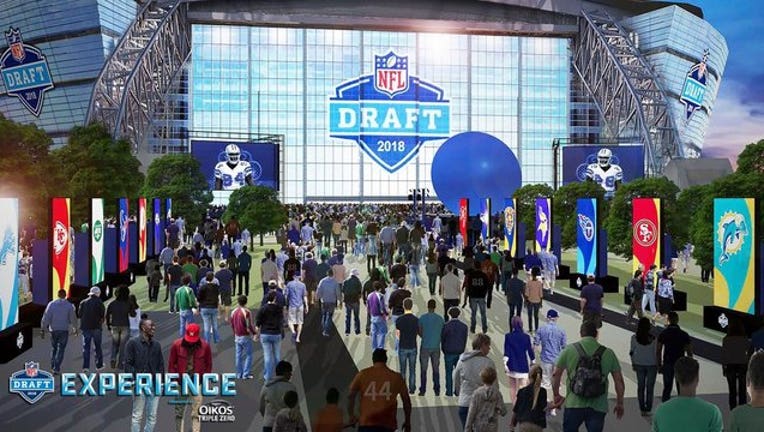 A look at some of the top prospects available at each position in the upcoming NFL draft (x-denotes early entrant):

Position outlook: Beyond Bradley Chubb, most of the best potential pass rushers have question marks that could keep them out of the first round.

Strengths: Rushes with a good combination of power and speed, and varied moves. Holds his ground well against the run.

Weaknesses: Not quite the elite athleticism of a player such as Myles Garrett, which could limit his upside.

Strengths: Long, fast and explosive athlete with maybe even more upside than Chubb.

Weaknesses: Instincts and reaction are a work in progress, limiting his speed and quickness.

Gone by: Pass rush potential like this generally doesn't last past top 15.

Weaknesses: Needs to play stouter against run and could be limited to 3-4 outside linebacker.

Weaknesses: Production comes and goes, and he did not show much last season after returning from a shoulder injury.

Gone by: Day 2 though first round is definitely possible.

Strengths: Strength and technique allow him to get rid of blockers effectively.

Fact: Elite lacrosse player in high school who had a scholarship offer to Notre Dame.

Position outlook: Could be no defensive tackles taken in the first 15 or 20 picks, but a handful or more between 20 and 45.

Weaknesses: His pass rush is almost all power.

Strengths: Athleticism and quickness for his size outstanding.

Strengths: Explodes off the ball and can make plays up and down the line.

Weaknesses: Holding point of attack. Could end up sliding outside.

Strengths: Relentless and quick off the ball and into the backfield.

Weaknesses: Undersized for an interior lineman, which could relegate him to certain schemes.

Fact: Diagnosis of a heart condition kept him out of the combine, but has been cleared since.

Strengths: Excellent recognition, sideline-to-sideline range and athleticism, with coverage skills to keep him on the field on passing downs.

Weaknesses: A bit undersized and can get engulfed by big blockers - if they can get to him.

Fact: Won the Butkus Award as best linebacker in college football in 2017.

Weaknesses: Needs some work on shedding blocks and his pass rush is more potential than well-developed skill.

Fact: Grew up in Auburn, Alabama.

Strengths: Long and rangy, and seemed to be in on every tackle for the Broncos.

Weaknesses: More power would be helpful, and some patience to cut down on over-pursuing.

Fact: In first year as a full-time starter was Mountain West defensive player of the year in 2017.

Strengths: Has 4.4 speed that could lead to a move to safety, but was also a terror as a pass rusher.

Weaknesses: Griffin lost his left hand to amputation when he was young. It has proved to be no limitation throughout a stellar college career, but it could influence where he fits in an NFL defense.

Fact: His twin brother, Shaquill, plays for the Minnesota Vikings.

Gone by: Total wild card, but it would be surprising if he is not drafted at all.

Position outlook: NFL teams draft lots of cornerbacks and there are about seven with a chance to squeeze into the first round, or provide good value in the second, depending upon taste.

Strengths: Blazing speed, physical for his size, and gets his hands on a lot of passes.

Weaknesses: Any issues stem from size and strength, neither of which is optimal but have hardly held him back.

Fact: Sat out Ohio State's Cotton Bowl game against USC, a decision he made late into game preparation.

Gone by: Consensus first cornerback off the board, probably top 10 or so.

Weaknesses: Make-up speed is questionable and tackling could use some work.

Fact: One season as a starter at Iowa - but what a season! Led the country with eight interceptions, including two returned for touchdowns.

Gone by: End of first round.

Strengths: Big and strong, with lots of experience.

Fact: Worked his way into the starting lineup as a freshman.

Weaknesses: Not much power in his game.

Fact: Leg and hand injuries limited him to playing about half of last season.

Strengths: More quick than fast, and strength that allows him to play bigger than he is listed. Dangerous kick returner.

Weaknesses: Needs technique work and consistency throughout his game.

Fact: Signed with North Carolina out of high school, but transferred to UCF after his freshmen year - which included a suspension for an altercation at a party.

Weaknesses: Not a physical tackler and change of direction is a bit stiff.

Fact: Both his father and uncle played college football.

Position outlook: Two top-10 talents and then several players who will be more scheme-fit picks.

Weaknesses: The nits to pick: He is not an explosive hitter and maybe he could use a few extra pounds.

Fact: Returned four interceptions for touchdowns in his first two seasons at Alabama.

Gone by: Only the NFL's love affair with quarterbacks keeps him around past top five.

Strengths: A little more explosive athleticism, but not quite as much polish as Fitzpatrick.

Weaknesses: Anticipation and diagnosis of plays need some work.

Fact: Missed almost all of the 2016 season to a knee injury.

Strengths: Tough in run support and nasty on receivers in the middle of the field.

Weaknesses: More of a hitter than tackler and not as effective in coverage.

Fact: Went to high school in Tallahassee, Florida, before choosing the Crimson Tide over the Seminoles.

Strengths: Good range as a center fielder, plus solid in run support.

Weaknesses: Had issues when forced into coverage.

Gone by: End of second day.

Position outlook: As usual, not many punters and kickers will have their names called during the draft. Though one punter stands out.