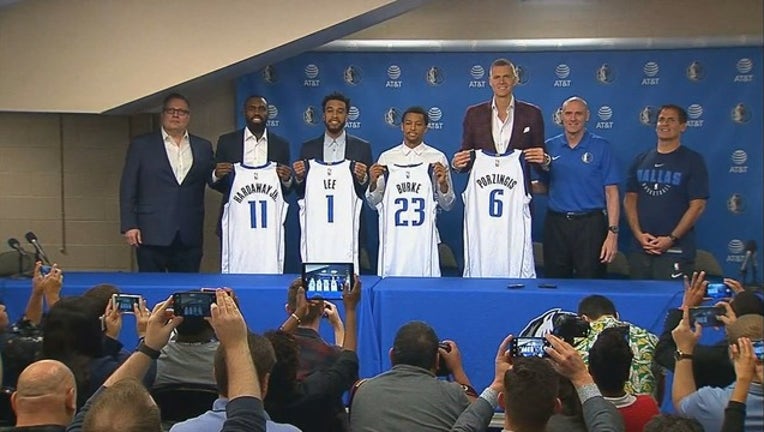 The NBA trade deadline has come and gone, with more than 20 teams swinging deals and more than 20 draft picks changing hands in the days leading up to the closing of the window at 3 p.m. Thursday.

Some of those draft picks extend until 2024.

And that means there are players perhaps in eighth or ninth grade, right now, who essentially have gotten traded in the last couple days - because the draft slots they'll fill five years from now have changed hands already. So nobody will know with absolute certainly what the full impact of Trade Deadline 2019 will have on the NBA, but in the short term, there's some clear teams that did really well and others who didn't come away happy from trade season.

The way the Harrison Barnes trade went down was awkward and unforgettable - Dirk Nowitzki will be the answer to the trivia question - "who replaced Barnes when the Mavs had to take him out of a game because they agreed to trade him during play?" - but Dallas transformed itself during trade season. They now have a ton of cap space for this summer, and the additions of Kristaps Porzingis and Tim Hardaway Jr. to play alongside Luka Doncic suggest that Dallas is ready for the long haul.

Their trade where they sent Tobias Harris to Philadelphia was truly smart for both sides. Getting a pair of future first-round picks is huge for the Clippers, who are well-positioned financially (and in terms of roster flexibility) to be in the mix for Kawhi Leonard this summer. The whole week was a series of good moves for the Clippers.

Though it wasn't a true trade-deadline move, the trade last week that sent Kristaps Porzingis to Dallas means the Knicks will have room for two max free agents this summer.

The Harris trade from the Clippers says the 76ers are all-in, right now, on trying to win the Eastern Conference. Best starting five in the East, arguably.

John Wall's Achilles tear changes everything for Washington, which managed to deal Markieff Morris and Otto Porter Jr. to escape the luxury tax.

Team with NBA's best record adds Nikola Mirotic, who gives Mike Budenholzer so many new options with the big-man lineup. The Bucks got better.

Marc Gasol will fit perfectly with this roster, and although the Raptors were fond of Jonas Valanciunias this one is unquestionably an upgrade.

They got better with the Iman Shumpert addition, and escaped the luxury tax.

The Miami Heat coach has had to juggle a massive logjam at guard all season, to the point where he said he was sickened by not being able to find minutes for Wayne Ellington. Trading Ellington and Tyler Johnson to Phoenix for Ryan Anderson gives Miami some big tax relief, but the more important part of the deal is that it gives Spoelstra some relief from the headaches he's had managing a rotation with too many wings.

JURY STILL OUT ON...

Give the Kings credit. They're all-in on winning now. By getting Barnes from Dallas and adding him to their young core, the Kings are saying they have a plan not only for their playoff push this year but - since Barnes has a $25.1 million option for next season - they obviously have a plan for 2019-20 as well. There is a playoff spot to be had in the Western Conference, and the Kings haven't been to the postseason since 2006. That's the longest current streak of futility in the NBA, and it might be ending in a couple months.

He's free to find a new home following his acquisition and subsequent waiving by Chicago, and now that the trade chips have settled Anthony will finally be able to decide where he fits best and target those teams as he offers himself up as a late-season rental. His closest friends in the league, players like Dwyane Wade and Chris Paul, insist that Anthony can still play. Soon we'll know which NBA team agrees.

Ellington was stuck in a rotation crunch with Miami, so getting traded to (and then waived by) Phoenix means he gets to choose his own future. Contenders will come calling for Ellington, the Heat recordholder for 3-pointers made in a season.

Toronto, Philadelphia and Milwaukee all made significant moves. The Celtics stood pat. Clearly, the plan is to get Anthony Davis.

They were not expected to be a major player in the trade market. But now they can survey the landscape, look at who's out there on a loaded buyout market, and fine-tune their roster. Which, one would expect, they will.

Nik Stauskas and Wade Baldwin IV started the week in Portland. Then they got traded to Cleveland. Then Houston. Then Indiana. And they'll be waived by the Pacers. By the weekend, they could each be on their fifth team in about seven days.

They didn't win or lose. They probably just feel dizzy.

It's really by no fault of their own but the Lakers wound up being the unintended consequence of the Anthony Davis situation. Davis and his agent - Rich Paul, who also happens to be LeBron James' agent - asked for a trade, and all the attention immediately went on the Lakers when that happened. New Orleans didn't move Davis, half the Lakers' roster now knows they were on the trading block, and it's going to be very tough for the Lakers to right the ship now as they try to get a Western Conference playoff spot.

Speaking of Davis, the Pelicans lost this trade season because now they know that the miracle isn't happening. Davis is gone, either this summer in a trade, next season in a trade, or in the summer of 2020 as a free agent. How that will affect attendance, morale, winning, the job security of coach Alvin Gentry and general manager Dell Demps all remains to be seen. It's not going to be a lot of fun.

Trade Season has seemed to overshadow everything on the court for the last few days. Golden State had a 15-minute stretch against San Antonio on Wednesday night where it shot 24 for 25 - 96 percent! - from the field and scored 65 points in barely over a quarter. All that was overshadowed by Kevin Durant's postgame comments where he blasted reporters for what he considers to be unfair reports about his future.

He stayed in Memphis, and lost his wingman in Marc Gasol. Conley has faced one challenge after another in recent years, and this is going to be another one for one of the league's most-respected players.

Tim Reynolds is a national basketball writer for The Associated Press. Write to him at treynolds@ap.org