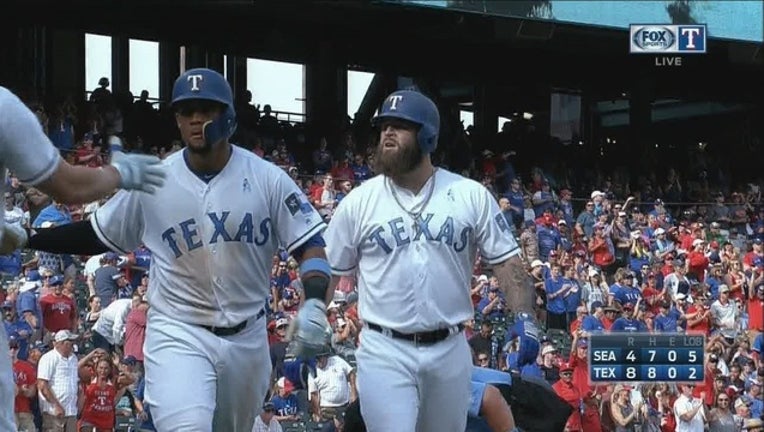 ARLINGTON, Texas (AP) - The Texas Rangers' biggest scoring surge of the season has the two-time AL West champions back over .500 for the first time since May 24.

Mike Napoli hit two home runs, connecting along with Rougned Odor and Shin-Soo Choo in the sixth inning to power the Rangers past the Seattle Mariners 10-4 on Saturday.

Following Friday night's 10-4 win in the series opener, the Rangers have their first back-to-back double-digit scoring games of the season.

Napoli's two-run drive capped a five-run first that sent the Rangers (34-33) to their seventh win in eight games, and they added five in the sixth. Seattle lost its third in a row.

"To tack on runs was huge for us today up and down the lineup," Texas manager Jeff Banister said.

Martin Perez (3-6) won for the first time since May 18. He left with a 5-4 lead with one out in the sixth after giving up a 463-foot, three-run homer to straightaway center by Mike Zunino.

Yovani Gallardo (3-7) retired the first two batters in the opening inning before giving up five straight hits. He lamented how big innings have hurt him all season.

"I've got to find a way to put guys away," Gallardo said. "It's frustrating. I made some pretty good pitches."

Odor hit a leadoff homer in the sixth off Dan Altavilla. Napoli and Choo later tagged the reliever for two-run drives.

"He got some balls up, and you can't do that with this club," Mariners manager Scott Servais said of Altavilla, who had not pitched since Sunday.

The returns of Napoli and Carlos Gomez from the disabled list on Friday have provided Banister with a full complement of offensive weapons. On Friday night, Gomez homered and had a season-high four RBIs.

"To be able to insert Gomez and 'Nap' and have them come back and have them do what they did is crucial for us going forward," Banister said.

Perez allowed seven hits, struck out five and walked two. With a 34-pitch third inning, he has had an inning of at least 25 pitches in four straight games.

"I just need to stay on the attack and don't give a chance to the (other) team to score," Perez said. "I just missed one pitch, and they scored four runs. But we won."

Zunino's three RBIs gave him 22 in June, a team record for catchers in a month. Dan Wilson held the club record with 21 in April 1996. Zunino is hitting .325 with seven homers since being recalled from Triple-A Tacoma on May 22.

"'Z' is a on a great run," Servais said. "He continues to make good adjustments in games. He's really trusting himself."

Adrian Beltre's single in the Texas first was career hit No. 2,957, giving him sole possession of 33rd place. He was tied with Wee Willie Keeler. Beltre, 38, is 41st in career home runs with 446.

Seattle recalled RHP Rob Whalen from Tacoma, claimed RHP Pat Light off waivers from Pittsburgh, optioned LHP Zac Curtis to Double-A Arkansas and outrighted RHP Ryne Harper to Tacoma. Light will report to Tacoma. ... Texas designated 1B-OF Peter O'Brien, who was at Triple-A Round Rock, for assignment. ... Rangers INF Hanser Alberto, out all season with an injured right shoulder, will have surgery on Monday.

Rangers: RHP Yu Darvish (6-4) is 5-0 in seven previous career starts at home vs. the Mariners.