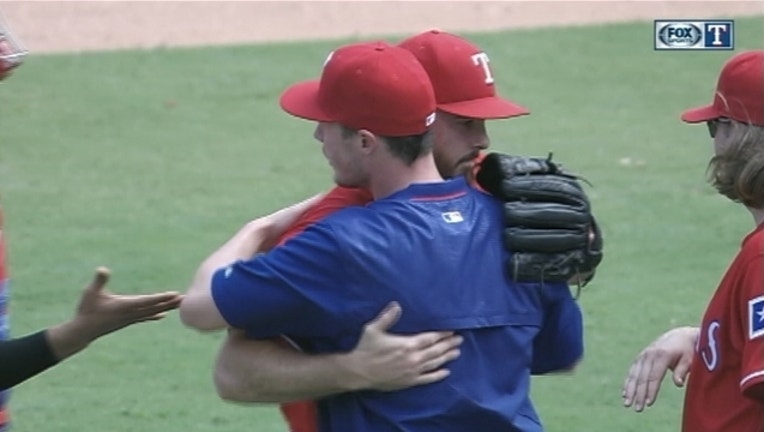 ARLINGTON, Texas (AP) — Mitch Moreland homered for the fifth time in his last five starts and Lucas Harrell won in his Texas debut as the Rangers beat the Kansas City Royals 5-3 on Sunday to finish a sweep of the four-game series.

Moreland's two-run homer was his 18th this season, the last five coming within 16 at-bats. Nomar Mazara also homered against the Royals, who have allowed an AL-high 141 homers this season.

Sam Dyson earned his 22nd save.

Eric Hosmer and Drew Butera homered for Kansas City, which has lost eight of its last nine games and 10 of its last 11 road games.

The defending World Series champion Royals went 7-19 in July, their worst month since recording the same record in July 2012.

Dillon Gee (3-5) gave up four runs on seven hits over six innings in his longest and most effective start of the season. He had a 6.43 ERA in six previous starts.

Harrell was the eighth pitcher to make a start for the Rangers in July with Colby Lewis and Derek Holland on the disabled list all month and Yu Darvish returning from the DL on July 16.

Before the game, the Royals placed closer Wade Davis on the 15-day disabled list with what manager Ned Yost called a mild flexor strain. Yost said it's the same injury that sent Davis, who has converted 21 of 23 save opportunities this season, to the DL in early July.

The temperature was 96 degrees at first pitch and reached 99. ... Gee played collegiately at Texas-Arlington and makes his off-season home in nearby Fort Worth. ... Rangers manager Jeff Banister gave CF Ian Desmond and SS Elvis Andrus the day off ahead of Monday's travel day. ... The Royals released Triple-A Omaha OF Travis Snider. He hit a combined .232 last season playing 87 games for Baltimore and Pittsburgh.

With Davis put on the DL, LHP Matt Strahm from was brought up from Double-A Northwest Arkansas and made his major league debut. He faced three batters and allowed one earned run. ... Rangers RF Shin-Soo Choo (back) did rehab work Sunday for the second straight day and reported no discomfort. He hopes to be ready when eligible for re-activation on Thursday.

Royals: LHP Danny Duffy (6-1) will start the series opener at Tampa Bay on Monday. Duffy has five wins and four no-decisions in his last nine starts, most recently losing on June 6.

Texas: RHP Yu Darvish (2-2) will make his seventh start since starting his season in late May following Tommy John surgery when the Rangers open a series at Baltimore on Tuesday. Both losses have come since returning from the disabled list on July 16 following shoulder discomfort.