MLB returning to FOX on July 25

It’s good to have you back, baseball. Welcome home.

PHOENIX - Major League Baseball hasn't always been at the forefront of the social justice movement in recent years, with leagues like the NBA and NFL usually taking center stage.

But in the aftermath of George Floyd's death in Minneapolis — and because of the quirks of a coronavirus-altered sports schedule — baseball is in the position of having the American sports world largely to itself for the next week.

Even before Thursday's opening day, players and coaches in the sport are taking a more active approach to supporting racial justice.

Among the examples: San Francisco manager Gabe Kapler and several players kneeling during the national anthem before an exhibition game and several Dodgers — including NL MVP Cody Bellinger and three-time Cy Young Award winner Clayton Kershaw — speaking out about racial injustice in a video message.

“I wanted to demonstrate my dissatisfaction with our clear systemic racism in our country and I wanted them (players) to know that they got to make their own decisions and we would respect and support those decisions,” Kapler said after Monday's game. "I wanted them to feel safe in speaking up.”

The most recent protests during the anthem seemed to draw the ire of President Donald Trump, who wrote on social media Tuesday morning: “Looking forward to live sports, but any time I witness a player kneeling during the National Anthem, a sign of great disrespect for our Country and our Flag, the game is over for me!”

The Milwaukee Brewers posted a picture on social media of nearly 20 players and coaches wearing shirts that read “Justice, Equality, Now." The Brewers wore the shirts during their intrasquad game.

It's a marked change for baseball, which has dealt with a slow decline in the number of Black players for several decades. In recent seasons, the percentage of Black players has hovered around 8%. For a sport that proudly recognizes Jackie Robinson — who broke MLB's color barrier in 1947 with the Brooklyn Dodgers — the decline has long been a source of frustration.

Milwaukee Brewers outfielder Lorenzo Cain, who is Black, said that recent discussions with teammates have been encouraging.

“There’s been a lot going on over the last few months, but with me and a few guys on the team, we’ve been holding Zoom calls about the issue at hand,” Cain said earlier this month. “We’re all coming together, talking about it. I’m educating them, I’m educating myself on everything that’s going on. We all just want things to change, want things to get better.” 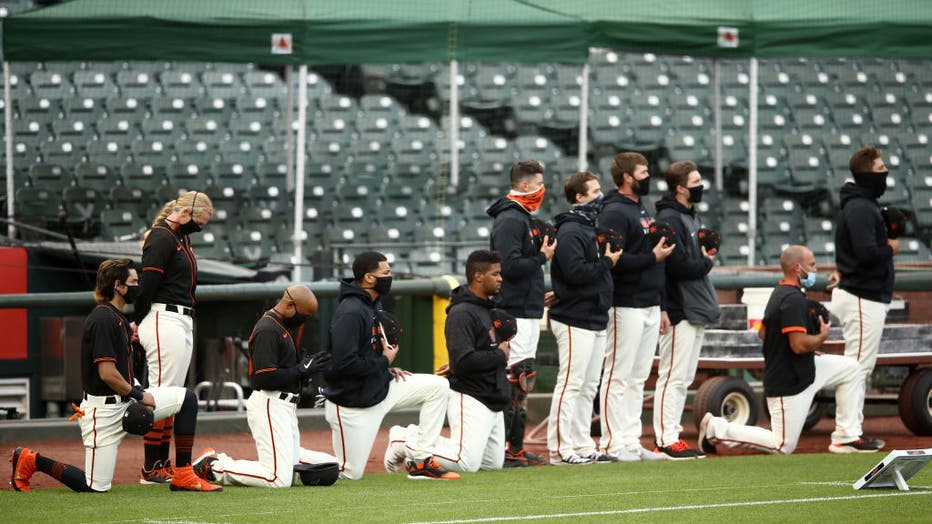 Players for the San Francisco Giants stand and kneel during the National Anthem before their exhibition game against the Oakland Athletics at Oracle Park on July 21, 2020 in San Francisco, California. (Photo by Ezra Shaw/Getty Images)

Miami Marlins pitcher Stephen Tarpley agreed that it's something players are “actively talking about." He said within the Marlins there “are a lot of good discussions, and a lot of open minds and open hearts.”

He said the Marlins were still discussing ways to show on-the-field support.

“I don’t know if we’re necessarily formulating anything huge, but little things are going to be what’s important to keep this thing rolling in the right direction,” Tarpley said. “I don’t think anything big needs to be necessarily done. Discussion is the first step. If we have everybody stand on that line and understand what the message is, that’s another step.”

Kapler's kneeling Monday was on the same field where former A’s catcher Bruce Maxwell in 2017 became the first major leaguer to kneel for the anthem. Former San Francisco 49ers quarterback Colin Kaepernick started taking a knee in 2016 to protest racial inequality and police mistreatment of minorities.

Kaepernick and Maxwell were outliers during those days, when such actions were roundly criticized. But as baseball has shown during the past week, views have changed vastly in 2020.

Arizona Diamondbacks GM Mike Hazen and manager Torey Lovullo said they've had several discussions at the team level about the ways it wants to support social justice. They also said organizations were in talks with MLB about ways to show league-wide unity.

Hazen said any show of support shouldn't be a one-day event.

“Opening day will be another marker in that, but it's going to continue to endure beyond that as well," Hazen said. “The changes, in terms of highlighting systemic racism, injustice, equality, those issues are going to be here forever.

"It's on all of us to do what we should be doing to stamp those things out.”