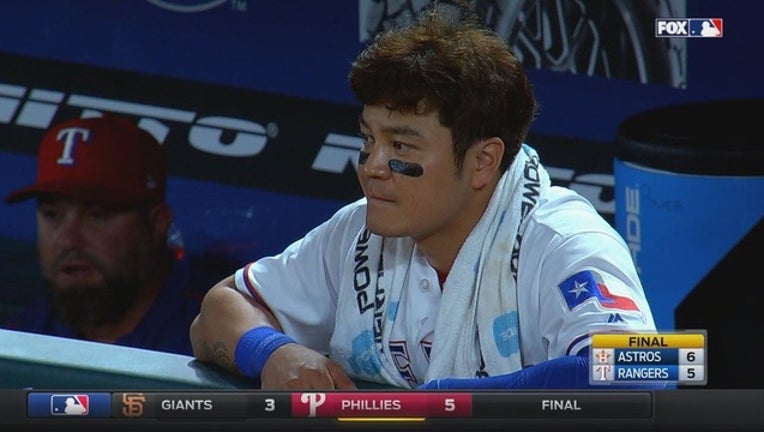 ARLINGTON, Texas (AP) - Carlos Beltran had three hits and drove in three runs as the Houston Astros extended their major league-best winning streak to nine in a row, beating the Texas Rangers 6-5 on Saturday night.

Jose Altuve also had three hits for Houston, including a key solo homer to lead off the ninth.

At 40-16, the Astros have the best record in the majors and their best start in franchise history. They are 14 games ahead in the AL West over two-time defending division champion Texas, which is 3-10 since a 10-game winning streak that is still the longest in the majors this season.

Six Astros pitchers combined for 18 strikeouts, which came only nine days after Rangers hitters matched an MLB record for a nine-inning game with 20 strikeouts against five Boston pitchers.

Beltran's seventh homer leading off the second tied the game at 1-all after the Rangers got a quick run off Lance McCullers in his first start since being named the AL pitcher of the month in May.

The Astros went ahead to stay after six straight batters reached with one out in the third, and four of them scored. Carlos Correa had a tiebreaking RBI single before Beltran's two-run single. Correa then scored on a wild pitch by Andrew Cashner (2-5).

Chris Devenski (4-3) worked 1 2/3 scoreless innings after taking over for McCullers in the fifth. Ken Giles worked the ninth for his 15th save in 16 chances even while allowing an RBI single by Adrian Beltre.

Elvis Andrus, who got married Thursday when the Rangers had a day off, had three hits and drove in three runs.

Andrus had an RBI single in the first after Shin-Soo Choo's leadoff single before a wild pitch. Andrus added a two-run double in the fifth and scored on Beltre's one-out single that chased McCullers.

CLOSING IN ON MILESTONES

Beltre has 2,950 career hits, including eight in five games since his season debut this week after missing the first 51 games because of calf issues. ... Astros LF Norichika Aoki got his 1,995th career hit, his 711th in the majors to go with 1,284 he had in Japan.

Astros: Brad Peacock (2-0), who hasn't won an MLB start since Sept. 2, 2014, is set to make his third consecutive start after 12 relief appearances to begin the season

Rangers: Martin Perez (2-5) starts as the Rangers try to avoid being swept in a series at home for the first time since losing three straight to Cleveland to start the season.