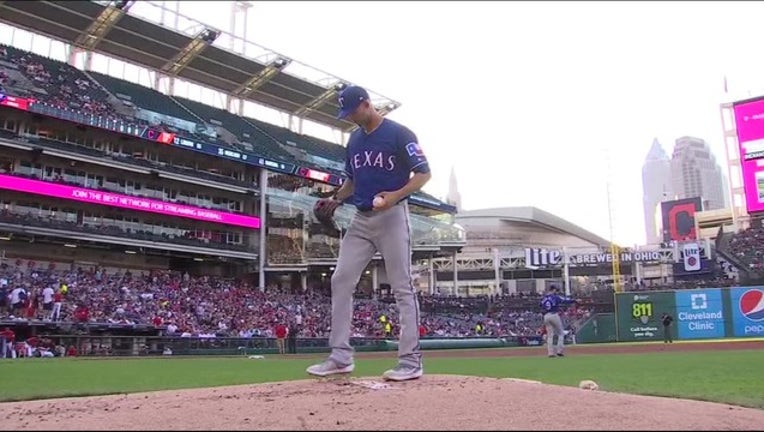 CLEVELAND (AP) - All-Star Mike Minor and the Texas Rangers finally exhaled after the trade deadline. They haven't lost since catching their breath.

Minor struck out seven over seven innings - allowing one runner to reach third base - and combined with Jesse Chavez and Jose Leclerc to shut down the Cleveland Indians 1-0 Monday night.

Nomar Mazara drove in Elvis Andrus with a sacrifice fly in the fourth, providing all the offense the Rangers needed to extend their win streak to five and remain on the periphery of the American League wild card race.

"We didn't know what was going to happen, so now that the deadline is in the past, we know this is the team we're going to have," said Minor, the subject of many trade rumors. "Before, we thought some guys would be gone, but since then, we kind of came together a little more and we're just going out to play baseball."

Minor (10-6), a first-time All-Star at age 31, allowed seven hits and walked one in winning his second post-deadline start. The left-hander is 3-0 in eight career appearances against Cleveland, giving up a lone run in 23 1/3 innings.

The Indians, who are 37-16 since June 4, fell four games behind AL Central-leading Minnesota.

"I thought Minor did everything well and we kind of caught him at his best," Cleveland manager Terry Francona said. "He could elevate, he could spin the breaking ball to the back foot of the right-handed hitters and he had a changeup. We caught him on a bad night."

Andrus led off the fourth with a triple, coming home a batter later when Mazara flew out to short center. He easily beat the bouncing throw home from rookie Oscar Mercado.

Chavez worked a 1-2-3 eighth and Leclerc pitched the ninth for his seventh save, stranding José Ramírez at third base after his leadoff double off the chalk in right. Leclerc retired Tyler Naquin, Jason Kipnis and Franmil Reyes to end the threat.

"That's a big one for Jose and I think he'll sleep good tonight because that's his first real save opportunity since (regaining the closer job)," Texas manager Chris Woodward said. "Obviously, this is a big series for us and we want to see if we can get back in this thing."

Indians right-hander Aaron Civale (1-1), recalled from Triple-A Columbus before the game, allowed one run and three hits in six innings and struck out seven in his second big league appearance. He tossed six scoreless frames against Detroit on June 22.

Andrus went 2 for 4, raising his average at Progressive Field to a ballpark-record .417. His .370 career average over 72 games against the Indians ranks second behind Nomar Garciaparra's .374.

"We're just battling, man, the way we scratched and clawed," Woodward said. "Their guy pitched pretty well, but obviously, Elvis legging out a triple and Maz hitting a sac fly is what it came down to. That was good. We needed that."

Reyes struck out in his first two at-bats, giving him six whiffs in a row dating to Sunday. Jordan Luplow exited with a right hamstring cramp after stealing third in the seventh, when Cleveland had runners on first and third, but failed to score.

Indians RHP Carlos Carrasco, who was diagnosed with chronic myeloid leukemia on June 2, is scheduled to throw bullpen sessions Wednesday and Saturday. "I think we all hope he can come back and pitch for us, but saying anything else isn't fair to him," Francona said.

Rangers 3B Isiah Kiner-Falefa started at the spot for the third time in four days, which will be his primary job going forward. Kiner-Falefa exclusively played catcher prior to Friday. "We're thinking he will catch once every 10 days," Woodward said.

Rangers: RHP Shawn Kelley (right biceps soreness) was slated to throw live batting practice Monday for Triple-A Nashville. If all goes well, the closer will join the team in Cleveland to be evaluated Tuesday. Kelley was placed on the injured list on July 22.

Indians: RHP Dan Otero (right shoulder soreness), who has been on the injured list since May 31, will begin a minor league rehabilitation assignment Tuesday at Triple-A Columbus. He has appeared in 20 games, posting a 4.56 ERA without a decision.

Rangers: RHP Ariel Jurado (6-6, 4.92 ERA) will start on six days rest in his first career outing against Cleveland. He went 1-3 with a 6.99 ERA in six July appearances.