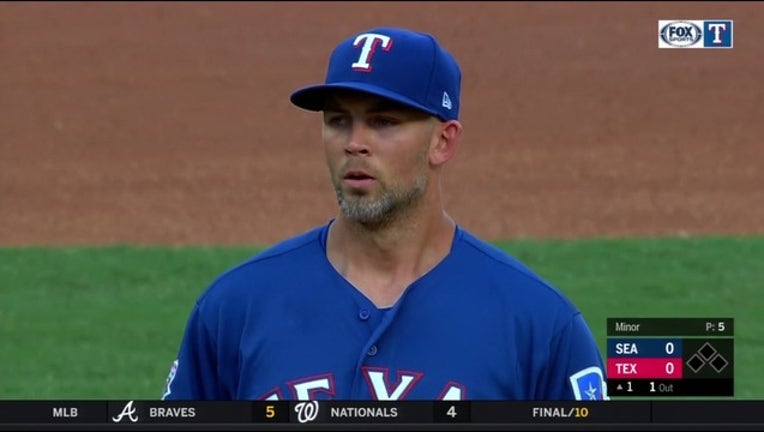 ARLINGTON, Texas (AP) - All-Star lefty Mike Minor won for the first time in more than a month, with the Texas Rangers going ahead to stay after he had thrown his last pitch in a 9-7 victory over the Seattle Mariners on Wednesday night.

After weeks of speculation that Minor could be traded, the deadline passed earlier in the day with him still in Texas. He trailed 5-3 when he left the mound after the top of the fifth, but Willie Calhoun's three-run homer in the bottom of the inning put the Rangers in front before they went to the bullpen.

Austin Nola and Keon Broxton homered for the Mariners, who saw the end of a six-game winning streak that had matched their longest of the season.

Minor (9-6) needed 103 pitches to get through five innings for his first win since June 26. He had five strikeouts while matching a season high in allowing 11 baserunners (seven hits, three walks and a hit batter). Minor, signed with Texas through the 2020 season, was 0-2 with a 6.04 ERA in his previous four starts.

Jesse Chavez, the fourth Texas reliever, worked the ninth for his first save this season.

Wade LeBlanc (6-4) was gone after 4 1/3 innings, leaving a batter after allowing the homer to Calhoun that just cleared the 8-foot wall in the right field corner.

LeBlanc had entered after an opener in nine of his previous 10 appearances, but started this game after the Mariners traded relievers Roenis Elías and Hunter Strickland to the Washington Nationals earlier in the day.

Seattle loaded the bases with no outs in the fourth before leadoff hitter Mallex Smith's high infield chopper just over Minor's outstretched glove for an RBI infield single. J.P. Crawford followed with a two-run single.

Pence, who was elected by fans as the American League's starting DH but couldn't play in the All-Star Game because of a right groin strain, had an RBI single in the first and finished with three hits. The Rangers had trade offers for Pence until the final minutes before the deadline.

The Rangers went ahead 9-5 in the seventh when Logan Forsythe hit a two-run single and eventually scored on an error. Broxton's homer was a two-run shot in the eighth, in his second game for Seattle since being claimed off waivers from Baltimore on Saturday.

Mariners: LF Tim Beckham left after the first inning because of oblique tightness and will be re-evaluated Thursday. ... RHP Félix Hernández is scheduled to make a rehab start Friday night for the Everett AquaSox, the short-season Class A team for which the 2010 AL Cy Young Award winner started his pro career in 2003 when he was only 17. He has been out since May 12 because of a right shoulder strain.

Rangers: All-Star slugger Joey Gallo is at least two or three weeks from swinging a bat after surgery to remove the hamate bone from his right wrist. Gallo had surgery July 25. Gallo, who has 22 homers in 70 games this season, said the wrist had been bothering him for about two months before he had surgery.

Mariners: After a day off, the Mariners open a three-game series at AL West-leading Houston on Friday night.

Rangers: RHP Lance Lynn looks to match the major league lead with his 14th victory when Texas plays at home Friday night against the Detroit Tigers.